One day to the European Parliament elections and one more attempt by Prime Minister Theresa May to get her Brexit bill through Parliament. In her speech yesterday, she recognised that a People's Vote is becoming more likely, but failed to make the kind of bold offer that could have unlocked the crisis. With Farage's Brexit Party moving ahead in the polls, it is vital for everyone to get out and vote for pro-People's Vote parties tomorrow.

It was billed as the last throw of the dice for the Prime Minister as she desperately tried to secure her “legacy” of delivering Brexit before sailing off into the sunset. A “bold new offer”.

She offered gifts and trinkets to all sides in a bid to get her Withdrawal Agreement Bill over the line: addressed the backstop, workers’ rights, a “customs union” that really wasn’t, “close-to frictionless trade” but no single market or free movement, environmental protection. Even made a “promise” of bringing a People’s Vote.

It came across as a somewhat rambling wishlist of things that might persuade MPs to pass it if the details could be negotiated later.

But this proposal faces the same problems of any form of Brexit: it cannot meet the promises made for it in 2016, there are real costs already hitting industries and public services, and it does nothing to provide long term certainty or clarity for business.

Little wonder that it was pretty much rejected by everyone within minutes of her leaving the lectern.

Boris Johnson said no, Jacob Rees-Mogg said no. Dominic Raab said no. Andrew Percy, who even pulled out of a best man’s speech to back one of her previous bills, said no. Labour said no. The Lib Dems said no. The DUP said no. Many Tory MPs who had previously supported her, said no, that this proposition had made it worse.

It's worth dwelling for a minute on what she said about a People's Vote: she said that if her bill was passed, MPs could then vote for a new public vote.

But if the Bill was passed, as Keir Starmer pointed out in his Today programme interview this morning, MPs could have tabled such amendments anyway. And, as with much of what she proposed, all of it could be ignored by a new Tory leader and Prime Minister.

The PM made a threat that if People's Vote MPs didn't back her Bill, they would lose their last chance of putting Brexit back to the people before we slid out with "No Deal". But a few seconds later, as she went back to appealing to the ERG, she contradicted herself saying failure to pass her Bill could result in a new referendum and the UK staying in the EU.

Some people nonetheless thought they detected a change of tone that - maybe - shows that even Downing Street now recognises a new public vote may be the only way to break the deadlock.

It's clear from today's newspaper reports that the PM was forced, in the face of a Cabinet revolt, to back down from offering to put a confirmatory referendum on the face of the Bill - which would have made things a lot more interesting.

People’s Vote campaigner and former Minister Margaret Beckett dismissed the new plan as a “hotchpotch offer”, insisting that only a decision to back giving the public the final say would unlock the crisis and solve this problem.

Many wondered if the new WAB would ever get as far as the floor of the House, given that it has almost no chance of passing.

There are rumours that an early move to have her removed as leader will begin, with MP Nigel Evans asking the backbench 1922 executive to change the rules. The PM has written a letter to Labour leader Jeremy Corbyn in a bid to enlist his support and will talk in the House today, but Labour Brexit spokesman Keir Starmer said on BBC's Today programme that she needed to "pull the vote".

The People's Vote campaign have been questioned over what should be on the ballot paper for a second public vote. We’ve always said it’s up to MPs to decide what’s on the ballot paper in consultation with the Electoral Commission and the exact question will depend on the exact circumstances by which a PV comes about.

But it’s fairly impertinent of our campaign to say what Brexit means – surely that it is up to the Brexiters to decide? What we do think is that staying in the EU would have to be one option because polls now show a consistent lead for “Remain”.

We think any alternative to staying in cannot be another unicorn like Brexit was in 2016 – it has to be a specific set of proposals so that people can assess the costs and benefits of it against staying in the EU with the deal we’ve already got.

Final day of campaigning for the European elections

There is just one more day of campaigning before the polls open with a big push coming to encourage a high turnout to combat Nigel Farage’s Brexit Party.

There are appeals for young people, in particular, to get out and vote to make their voice heard.

The message to all People’s Vote supporters is get out and vote for a party that is committed to a new vote. Check out our test site for guidance on who to vote for.

EU citizens in the UK have made an official complaint to the Electoral Commission, complaining that up to two million could be unable to vote tomorrow.

A group called “the3million” representing European citizens has written to the Election Commission claiming that bureaucratic mismanagement has led to many potential voters becoming disenfranchised.

British ex-pats in France have also complained that they received their voting papers too late to get them back in time for the votes to be counted, excluding them from the vote.

The polls are showing that Labour continues to be under pressure from People’s Vote supporters shifting to the Lib Dems and Green Party, while Tory support is collapsing, possibly to single figures. A YouGov/Times poll shows Conservatives down to 7%, Lib Dems up to 19%, Greens on 12%, with Labour at 13% and Brexit on 37%.

There are fears that British Steel will be declared bankrupt today with few signs that the Government will proffer a £30m last-minute loan to bail it out. There are more than 4,500 direct jobs at risk, while up to 20,000 in the supply chain could be affected. Jeremy Corbyn has called for the company to be nationalised to save it, but the Government wants to see potential buyers lined up to step in.

The company has blamed "Brexit uncertainty" for their plight and this whole episode, coupled with other recent news across a range of sectors, is a stark illustration of the damage Brexit is already doing to our economy. Now that we know that Brexit is threatening our industrial capacity, our skills base and the prosperity of thousands of people, it is only fair and democratic that the public decide if they want it to go ahead. 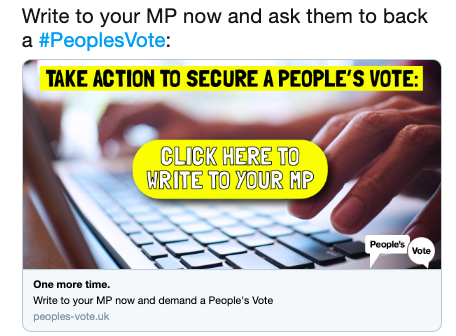 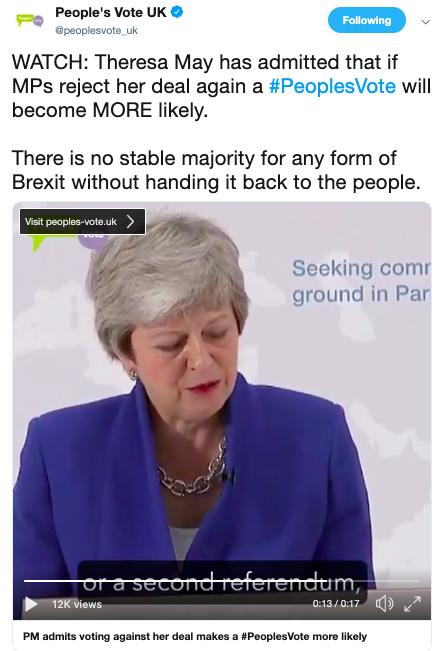 Labour Brexit spokesman Matthew Pennycock makes clear that the Prime Minister's offer doesn't pass muster and that any Brexit deal must be put to the public. 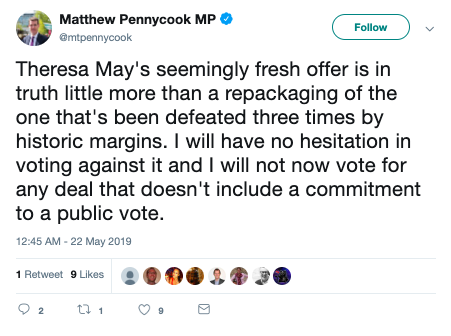 Summer of turmoil ahead of possible second referendum (Daily Mail)

Sean O'Grady: May's offer of a second vote is a trap (Independent)

Katy Balls: May is on course for an even worse defeat on Brexit (Spectator)