MPs return today from their latest recess, but will only be back until July 24 before heading off for their long summer recess. With distractions like President Trump's state visit and leadership elections, it is unclear if and when anything will be done to break the Brexit stagnation. A People's Vote is the only solution, but it is unclear when government and MPs will get on with fixing it.

Overshadowing the pomp and circumstance, the Twitter insults to London mayor Sadiq Khan, the banquet no-shows and planned protests, the clear danger of President Trump’s state visit is that he is manoeuvring the UK towards a no deal Brexit followed by a brutal trade deal.

He is emboldening his “friends” Boris Johnson, Nigel Farage and other right-wing politicians to renege on the £39 billion payment agreed with the EU, walk away with no deal.

It is clear why: Trump believes the Brexit crisis can be exploited to the benefit of US companies. As he tweeted yesterday, a "big Trade Deal is possible once UK gets rid of the shackles". By "shackles" he means the Europe-wide protections that uphold the standards we all cherish - from the food we eat to the affordable price of drugs in our NHS.

Trump's friend and UK ambassador Woody Johnson made clear that, from their view, "the entire economy" must be "on the table" in future trade talks.

Farmers’ leaders reacted angrily to the possibility of food standards being hijacked to allow chlorinated chicken or hormone-feed beef to flood the supermarket shelves.

National Farmers’ Union president Minette Batters condemned the prospect of products that are currently illegal “taking the legs out of the farming sector” in any new transatlantic trade deal.

Royal-watchers were trying to decipher whether the Queen was making pointed remarks in defence of organisations such as NATO and the EU in her Buckingham Palace banquet speech welcoming the President.

She said: “After the shared sacrifices of the Second World War, Britain and the US worked with other allies to build an assembly of international institutions, to ensure that the horrors of conflict would never be repeated.

While the world has changed, we are forever mindful of the original purpose of these structures: nations working together to safeguard a hard-won peace.”

This morning there is a business breakfast before other political events, but Labour leader Jeremy Corbyn will be boycotting Trump and speaking against him at the protest rally. A Parliamentary Labour Party meeting which would have discussed the disastrous European election results and Labour's fudged People's Vote position has been cancelled as Mr Corbyn heads to campaign in Peterborough for the by-election.

Conservative leadership favourite Boris Johnson might have a good video team, but he still has no answer on how he can deliver Brexit and keep his promises of frictionless trade.

Like many others who promised us a great deal if we left the EU, Johnson is now willing to accept a No Deal crash-out: something for which neither he nor anyone else has any mandate for. There is no majority for No Deal in Parliament either, so, despite all the promises that Brexit would allow British lawmakers to "take back control", the reality is that he wants to bypass Parliament completely and rule Britain like some 17th century absolute monarch.

Each passing day makes it clear the only democratic solution to this crisis is a People's Vote.

The fight for a People’s Vote and the fight against Donald Trump are two sides of the same coin. The divisive speech and actions from the US president have spread across the Atlantic, leading to a rise in xenophobia and hate crimes. The friendship of Trump with people like Boris Johnson and Nigel Farage is detrimental to us all.

The values that we fight for – a liberal, open and tolerant society – are the very same which are under threat here from the likes of Farage and Johnson, and across the pond in the United States.

For our Future's Sake student co-ordinator Isi Daley wrote in the HuffPost that "leading this fight against economic and social nationalism are young, diverse people from all walks of life. LGBTQ and BAME communities, men and women of all religious creeds and none are standing up for their future, demanding a people’s vote, and fighting against Trump.” 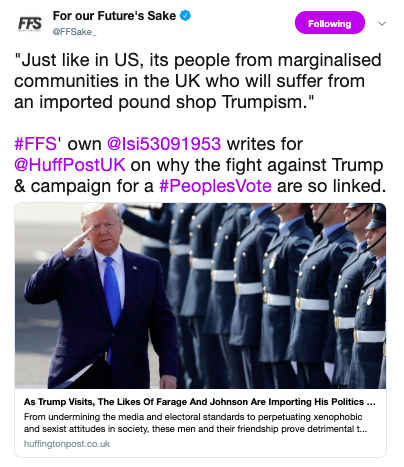 “He's not just here to spread his hateful views and tweet childish insults. He's here because he wants a post-Brexit trade deal with Britain that would force us to agree to anything he wants.

"It would mean handing over our beloved NHS to private US health care firms and abandoning food safety and animal welfare standards in exchange for chlorinated chicken and hormone injected beef. And he is openly backing Boris Johnson to deliver this for him." 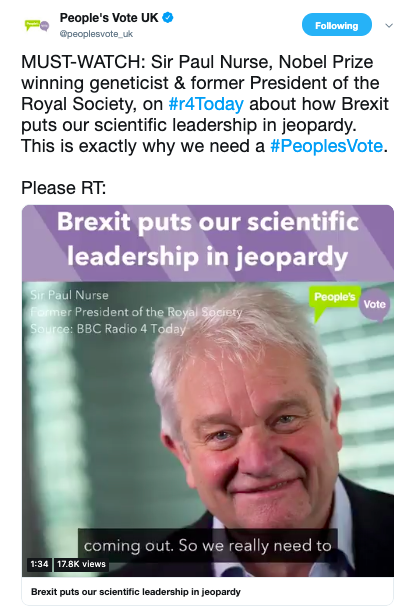 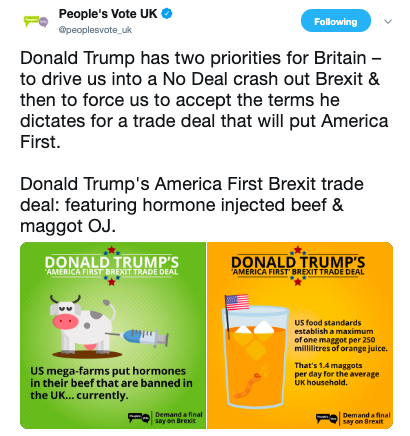 Isi Daley: As Trump visits, Johnson and Farage are importing the politics of division (HuffPost)

Owen Jones: These protests are about everything Trump stands for (Guardian)

Rob Ford: The Tinkerbell effect: is Britain on the brink of a Brexit realignment (New Statesman)

A Trump-Johnson-Farage coalition? We need Europe more than ever (New European)