It is Europe Day today, which recognises the peace and prosperity that has come from the European Union. Meanwhile, the Government is still talking of signing off on a deal with Labour before the European elections, but an important new report today reveals the true effect around the country of a customs union-only deal.

A customs union deal will leave us all worse off

Ministers are still deep in negotiations for a potential Brexit deal with Labour’s preferred option of a customs union at the core of the discussions. With hour upon hour of media coverage and frenzied discussion of the talks about a "compromise deal" on a customs union, there has never been a proper independent economic assessment about the costs.

As ever in this debate, when the facts emerge about a specific form of Brexit, it looks a lot less attractive than in the abstract.

But the first independent assessment of the economic impact for the UK of a customs union Brexit deal concludes that it would deliver an annual £80 billion hit to our national income, leave people an average of £800 worse off, reduce the Treasury’s tax revenue by £26 billion and cut money available for public services by £13 billion.

The National Institute of Economic and Social Research report is published today. Commissioned by the People’s Vote campaign but conducted independently, it highlights how such a deal would reduce Treasury spending power by £13 billion. This exceeds the cost of Labour's most expensive plans for government such as the scrapping of university tuition fees, so if John McDonnell found the money to pay for such schemes, it will be gone again if Labour forces this form of Brexit on the country.

It concludes: “While this type of customs union arrangement is seen as being as frictionless a trade relationship as is possible without the UK being in the single market, it would nevertheless involve significant non-tariff barriers that would hinder trade, particularly in services. That would be a material economic burden in view of the importance of services trade to the UK economy.”

It also predicts that the UK’s economy would be 3.1 per cent smaller a decade after leaving than it would have been had we stayed in the EU, while GDP per head would be around 2.3 per cent lower.

This is around half the impact NIESR expects from leaving the EU without any deal because the impact on trade in goods would be softened, but it would still result in a significant fiscal effect of a £26 billion reduction in government tax revenue. 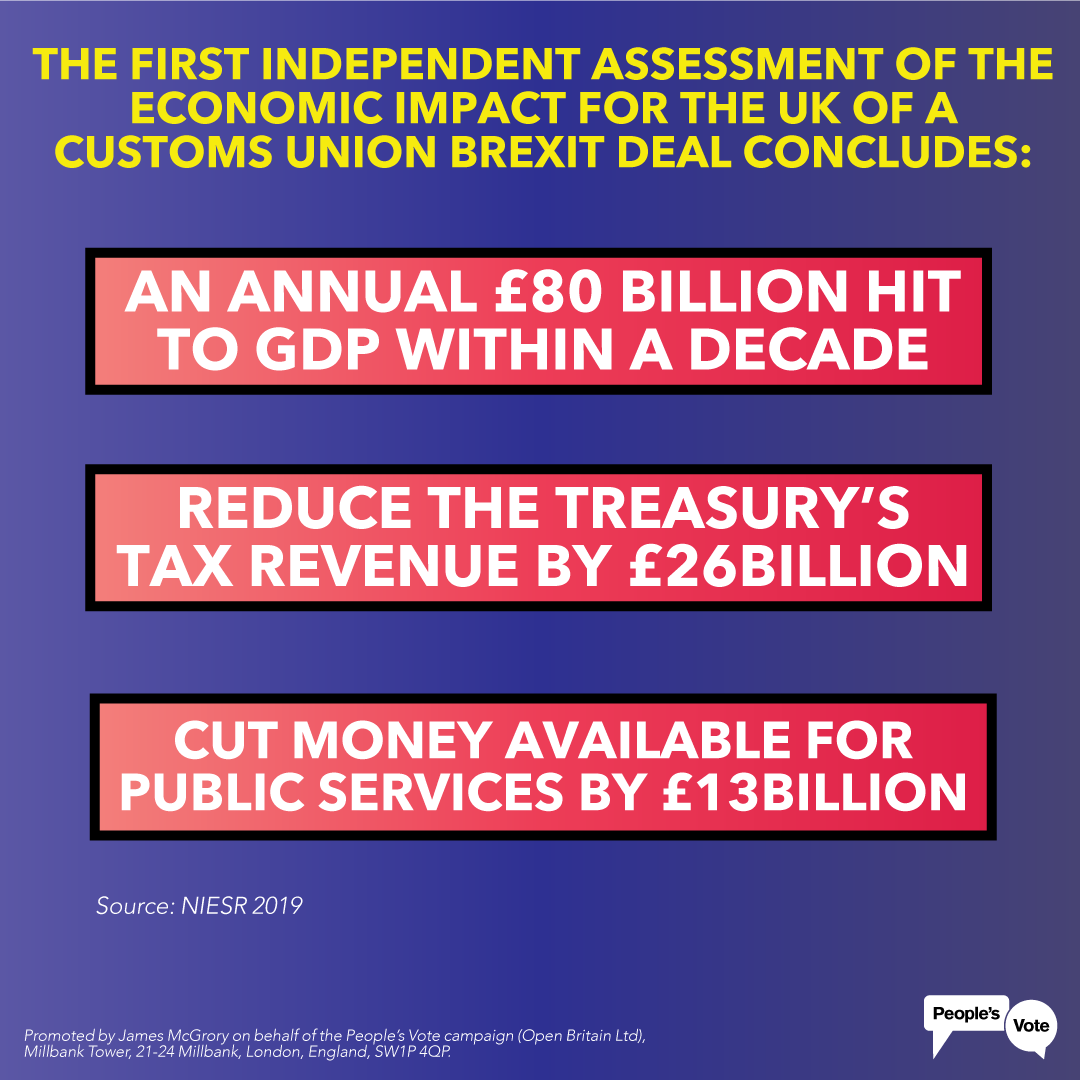 The NIESR report says the regional impact of a reduction in trade and investment would be felt directly in the financial and professional services sectors, based mainly around London and other large cities. But it says: “Other industries and regions would be affected indirectly so that all would end up poorer than they would have been had the UK stayed a member of the EU…GDP in each region of the UK would be reduced by a broadly similar amount, but with some variation from 2½ per cent to 4 per cent.”

And it warns that if the revenue shortfall was met by cuts in welfare or health care, this would be likely most to affect people many regions that voted to Leave in 2016 including Wales and the North of England.

Rachel Reeves MP, a leading supporter of the People’s Vote campaign, said: “A customs union deal is not as damaging for our economy as a no deal Brexit. But it is a mistake to regard it as a soft option – let alone a fix-all for a political crisis that has its roots in promises that can’t be met, real costs that have been ignored and the reality that there is no stable majority in Parliament or a lasting settlement in the country without this going back to the people in a new public vote.”

Garry Young, Director of Macromodelling and Forecasting for NIESR, said: “Leaving the EU for a customs union will make it more costly for the UK to trade with a large market on our doorstep, particularly in services which make up 80 per cent of our economy. This inevitably will have economic costs, with widespread implications. We estimate that all regions will be adversely affected and that there will be fewer resources available to pay for public services.”

Sections of the media will try to ignore this report or dismiss it as another example of "project fear", but there is a mass of hard economic analysis behind it that shows the effects of changes in trade barriers with our biggest market.

Parties gear up for European election

It’s European election time. Yesterday the Green Party's campaign launched, claiming to be “tough on Brexit and the causes of Brexit” with co-leader Jonathan Bartley declaring: "Every MEP elected from our brilliant team of candidates will be a commanding voice calling for what this country needs now: a people's vote.

"Politics is paralysed, people are ready for something new.”

Today sees the Lib Dems and Labour parties kicking off a fortnight of hustings for the election that was never meant to happen. The Lib Dems motto will be "Bollocks To Brexit".

With the Tories openly debating whether to kick out their leader while she still tries to negotiate an exit from Europe, it remains clear that a People’s Vote is the only solution for the political crisis.

The car crash TV of Brexit

The BBC4 documentary Brexit: Behind Closed Doors was a fly-on-the-wall study that surely just caused angst on all sides. To Brexiters, it confirmed their view that European politicans are arrogant and negative; to the other side, it seemed to demonstrate that the government were under-prepared and naïve.

It was designed to make “curtain-haired” (as The Sun describes him) European Parliament representative Guy Verhofstadt look good.

Car crash TV. It’s much easier to enjoy the drama of English teams winning in the Champions League with dramatic comebacks.

"What is the point of dragging this process on? Labour should be honest, end the talks and come out unequivocally for a People's Vote."

Labour MP Ben Bradshaw is fed up with the slow-moving Brexit talks between the Government and Labour leadership. 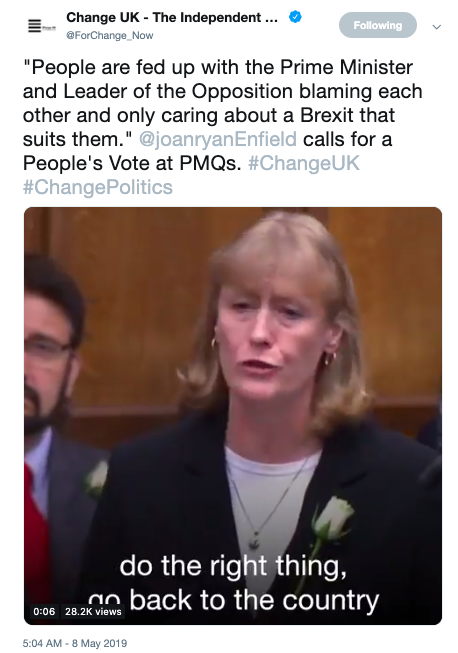 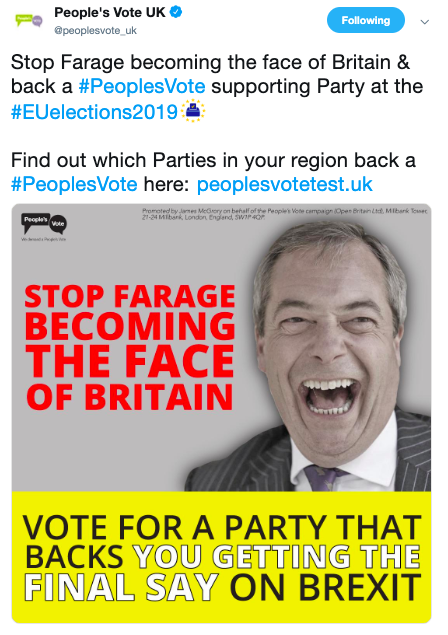 Nick Cohen: Which party will fight the rise of Farage? (Spectator)

Andrew Grice: Labour has seen through May's rebrand of the same deal (Independent)