The fallout continues from last week's European election results and the ongoing Brexit crisis: pretty much all political parties are in a state of change and drama. The number of MPs jumping into the leadership circus continues to grow, the Lib Dems are searching for a Vince Cable replacement, Labour is waging its own mini-war over Brexit policy. The continued political uncertainty demonstrates the need that business and others continue to cry out for: a resolution that will only come from a People's Vote.

This morning, in a significant move, Chancellor Philip Hammond indicated that a People's Vote could be the only way to break the Parliamentary deadlock. 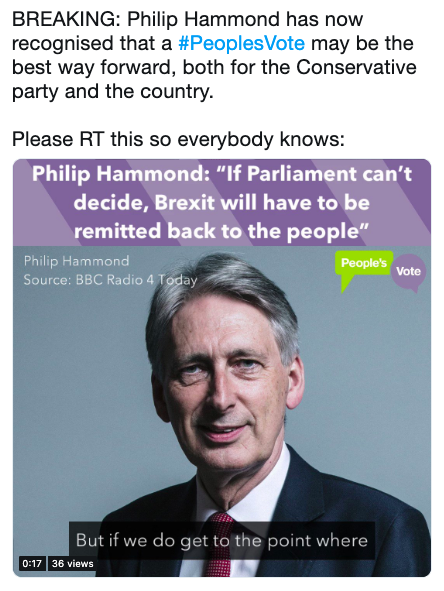 Corbyn shift to People's Vote being frustrated by inner circle

He called to do “whatever is necessary to stop a disastrous no-deal outcome” and said either a general election or new public vote were required to solve the crisis.

Labour supporters of a People's Vote said he needed to go further, saying that a clear and unambiguous position is required.

A rearguard action is being mounted by the inner circle surrounding Jeremy Corbyn to fight against a Labour policy change for a People’s Vote.

The largely unelected group are trying to frustrate Corbyn’s efforts to show Labour has listened to the results of the European elections and move quickly to capture the mood of members and voters. They include Seumas Milne, Karie Murphy, Andrew Murray and Unite leader Len McCluskey, known as the 4 Ms.

Party chairman Ian Lavery said Labour should forget about a People’s Vote, claiming: “It does feel that a certain portion of “leftwing intellectuals” are sneering at ordinary people and piling on those trying to convey the feelings of hundreds of thousands of Labour voters.” A People's Vote poll in his constituency of Wansbeck showed 69% of Labour voters want a People's Vote - presumably that includes some of those he calls "ordinary people".

People's Vote supporter and Labour MP Bridget Phillipson said: "Jeremy Corbyn’s words show he is at last beginning to listen to what our voters and members are saying.

“But, as John McDonnell has admitted and as the Tory leadership contest increasingly makes clear, there is no immediate prospect of a General Election. That is why it is now vital Labour follows through on its clearly stated conference policy by campaigning for the only available fair and democratic solution to the Brexit crisis – a People’s Vote that gives the public the final say.”

Tom Watson released the results of his own survey of party members with 84% saying they wanted an online ballot to decide Brexit policy and Welsh Labour leader and First Minister Mark Drakeford suggested that moves were set to be announced quickly, but the internal battle looks set to continue with certain members of Corbyn’s inner circle refusing to respond to the reality of the European elections results.

Yet more insight into the damage Brexit is doing to British business came yesterday when an influential Government advisory body called for an expansion of the list of occupations eligible for the UK’s non-European skilled work visas “as soon as possible” amidst the uncertainty of Brexit.

The Home Office-funded Migration Advisory Committee said psychologists, occupational therapists, vets, archeologists and web designers were among the professions that should be added to the official shortage occupation list.

The review, which was set up by Home Secretary Sajid Javid, gave two main reasons for the shortage: Brexit uncertainty and the resulting reduction in EU migration, the other being growing demand.

The MAC review demonstrates that promises made for Brexit cannot be met: less immigration will not lead to a stronger economy, while the promise of more for public services with less immigration simply doesn’t play out. The unreality of Brexit promises continually clash with the reality of the outcomes.

Meanwhile, the in-out chaos of the way Brexit has been handled led to car production plunging by almost half during April with the car industry bemoaning the “untold damage” being done.

Many of the UK’s car plants went into a temporary shutdown around the original Brexit date of March 29 in order to avoid disrupted supply lines, but this turned out to be unnecessary. The Society of Motor Manufacturers and Traders called for no deal to be taken off the table "immediately and permanently".

Business leaders are keen for an end to the chaos. CBI deputy director-general Josh Hardie said: "There is no question that a damaging no deal scenario feels more likely than ever, with October nudging closer. Right now firms are burning money on no deal preparations, stockpiling and relocating that could be better spent on improving the UK's poor productivity performance."

Lord Heseltine last night warned that the Conservative Party is in grave danger of being captured by the “narrow nationalism, phobia-filled and poisonous politics of Nigel Farage”.

He made his warning as Tory Chancellor Philip Hammond indicated on Radio 4's Today programme that he would back a People's Vote if there were no other solution available inside Parliament, another senior Conservative who is coming round to the reality that a People's Vote is the only way out.

The former deputy Prime Minister, who voted Liberal Democrat in last week’s European elections, said that he and millions of other Conservatives who supported staying in the EU at the last referendum will never be able to return if the party continues trying to force Brexit on the British people without them being given the final say.

In a speech to mark his appointment as President of the European Movement, he told his former party: “Turn yourselves into branch offices of Brexit if you wish.  But if you do so, you are on your own.  Those upon whom you depend to win power in a general election will not come back.  Good luck.  Goodbye.”

He hit out at those who believe we can have our cake and eat it and has a real fear that a new “Faragiste” Prime Minister will run down the clock for a no deal Brexit that would betray businesses, young people and the integrity of the UK.

The veteran politician vowed that he wouldn’t be silenced into betraying everything he had believed in all his adult life.

Boris Johnson was back leading the news last night over a court case to do with his notorious £350 million-a-week claim on Brexit and the NHS.

Our campaign has always been careful to avoid getting dragged back into the disputes of 2016. We’re fighting for a People’s Vote now that we all know so much more about Brexit than in the last referendum.

The new controversy, however,  does underline why we think that, if we do get a People’s Vote, we all want it to be different campaign, between competing visions for how we change Britain and how, maybe, we can reunite a country whose divisions were laid bare three years ago.

It would be great if the current campaign among 13 (and counting) Conservative leadership candidates was marked by an outbreak of straight talking unicorn-free honesty. But, given that Boris Johnson is the current front runner, we’re not holding our breath.

“Meanwhile the battle to save the Labour Party goes on, and the battle to get Brexit put back to the people goes on even more urgently. Both can be won.

I intend to be a part of both those fights and I hope to be in and around the Labour Party long after those around Corbyn, who have helped reduce the party to its current sorry state, have returned to the places and parties whence they came."

People's Vote campaigner Alastair Campbell plans to keep fighting after being expelled from the Labour Party for voting Lib Dem in the European elections. 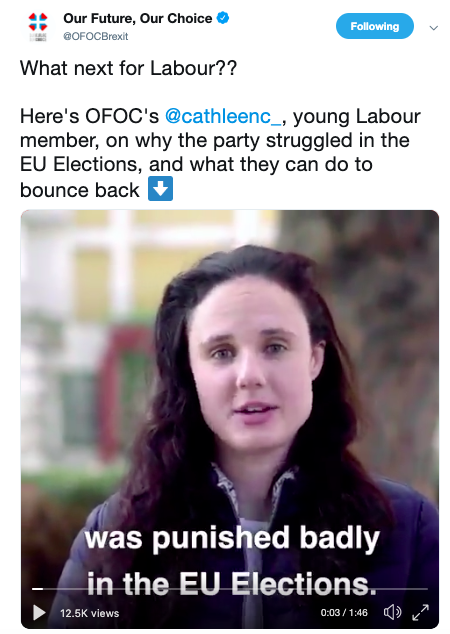 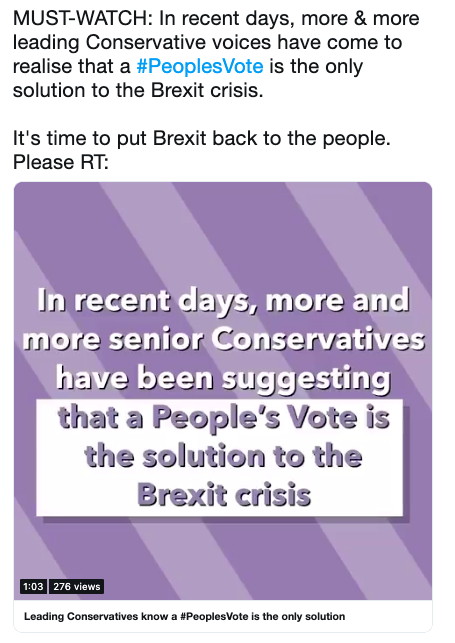 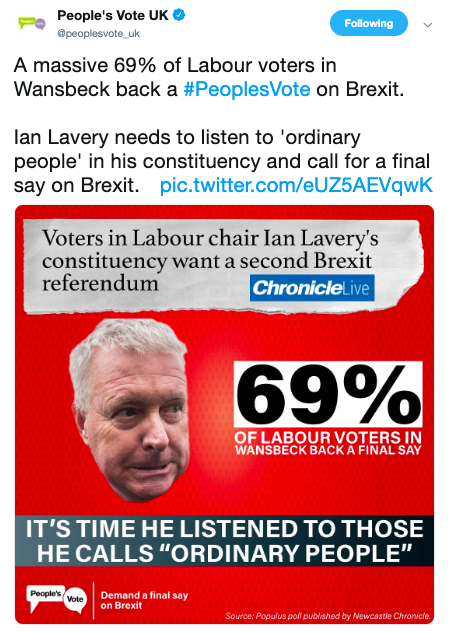 Corbyn: Any new Brexit vote will not be leave or remain re-run (Reuters)

Voters will desert you after Brexit, Heseltine warns (Times £)

Alastair Campbell: The inside story of exactly how Labour kicked me out (New European)

Chris Vince: It's hard but I must forgive Labour members who voted for other parties (Labour List)