Morning Briefing: Johnson forced to ditch "do or die" rhetoric as EU weighs up extension

Four months ago today, Boris Johnson made his totemic pledge that the UK would leave the EU on October 31 "do or die, come what may". Yet, like just about every promise he has made on Brexit, it looks like he will be incapable of delivering it.

With every day that passes, his destructive Brexit proposals are unravelling, his contradictory promises exposed, and his effort to bully and bounce shown to be bluster.

But Johnson is ever-desperate to find someone else to blame. Yesterday, he told the Commons the issue of an extension is now "in the hands of the EU -we will see what they do". They will probably do the right thing by agreeing to Johnson's truculent request for an extension. And that means our fight for a Final Say referendum is the only legitimate solution or this crisis will continue.

More than 353,000 supporters have signed our letter from the People to the Powerful. Have you signed yet? Go here to give your backing to a Final Say vote.

Boris Johnson has pulled out of a scheduled appearance before the Commons liaison committee today – the third time he has cancelled. In a scrawled note, he proposed a new date in “five or six months” time.

Committee chair Dr Sarah Wollaston said she was “astonished” and accused the Prime Minister of an “unacceptable” attempt to avoid scrutiny. Conservative MP Tom Tugendhat, who chairs the Foreign Affairs Committee said the decision was "very surprising and disappointing".

It is becoming a feature of Boris Johnson’s tenure that he will do anything to avoid detailed questioning of his actions. No wonder he doesn't want to take questions. His disastrous Brexit proposals are rapidly falling apart. We already know they would put a border down the Irish Sea and leave open the possibility of a No Deal crash-out at the end of next year. That is precisely why the ERG are supporting the plan.

At the same time, Johnson has been throwing around contradictory promises - offering assurances on workers' rights and a close economic partnership to Labour MPs, while offering the exact opposite type of future relationship to those on his own backbenches. He knows that the longer MPs have to scrutinise his plan, the clearer it will be to the Labour and independent Conservative MPs he needs to win over that we are heading for the hardest of Brexits. And the true cost for UK trade, businesses and jobs will only become clearer.

It is disgraceful he won't answer questions from the Committee on all this, but it's not in the least bit surprising.

Talks between Boris Johnson and Jeremy Corbyn over the Brexit bill timetable broke up in a predictably acrimonious way yesterday, with several reports suggesting that the Prime Minister’s aide Dominic Cummings was banging the table and calling for a general election.

It is unclear what will happen next with both party’s Cabinets split on whether to go for an election now: many Conservatives want Johnson to resolve Brexit first, while Labour are undecided between an election and a People’s Vote. Key to the path ahead is what Article 50 extension the EU will propose in the coming days.

The deadlock reinforces the need for a People's Vote as the only way to resolve a crisis that is driving everyone to distraction.

Boris Johnson appeared to have misled the House of Commons yesterday, by claiming his Brexit proposals would mean “no checks between Northern Ireland and GB [Great Britain]".

This directly contradicts what the Brexit Secretary told the House of Lords EU Committee on Monday, when he said firms in Northern Ireland would need to complete exit summary declarations for exports to the rest of the UK. 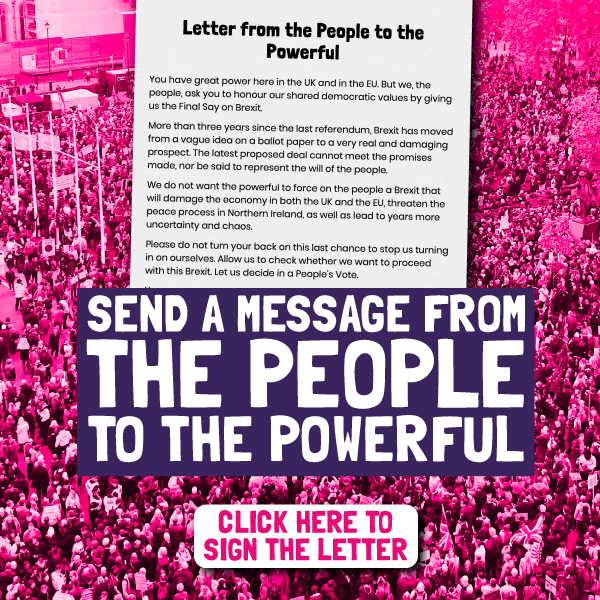 “Boris Johnson cannot be trusted to tell the truth on Brexit. You wouldn’t trust him to tell you the time. The more this Brexit plan is looked at, the worse it starts to look. No wonder Johnson was so desperate to avoid proper scrutiny of his Brexit law in the Commons.

“Boris Johnson cannot be allowed to force his Brexit on us without proper scrutiny or without the people having the final say. That is why we must have a People’s Vote.”

Leading People's Vote campaigner Anna Turley criticises the Prime Minister after he appeared to mislead the Commons over customs checks down the Irish Sea. 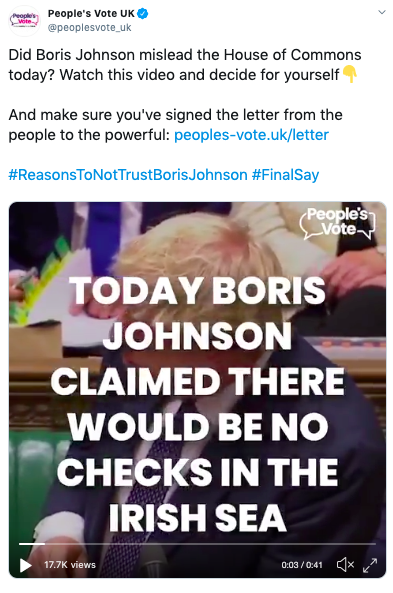 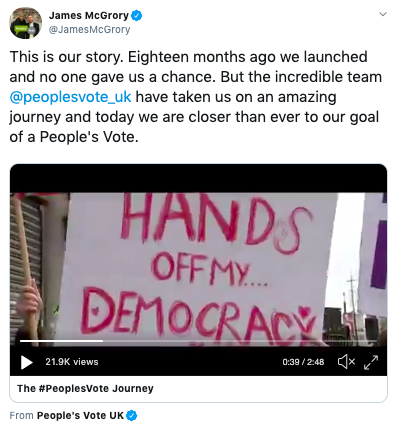 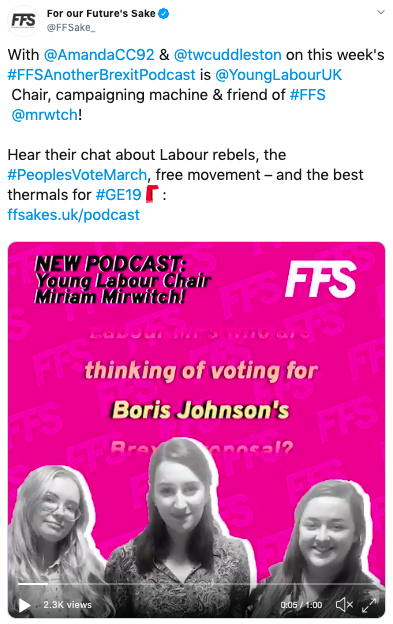 Phil Burton-Cartledge: How did the ERG go from hating any Brexit deal to loving Boris Johnson’s? (Guardian)