Boris Johnson is front and centre of the controversy over the resignation of the UK's ambassador in Washington Sir Kim Darroch. The whole affair is an insight into what the Brexit being advocated by Boris Johnson means - a Brexit that only the 0.25% of the population who are members of the Conservative Party are being given a say over.

Few business leaders are happy: Sir Richard Branson fears that a disastrous No Deal would lead to a collapse in the pound. He said it would be "destructive" for his  Virgin group which would need to shift investment out of the UK.

On Sunday, the citizens of Johnson's constituency of Uxbridge will let their voices be heard at a People's Vote rally, with shadow foreign secretary Emily Thornberry among the speakers. It is time to Let Us Be Heard, so join us and get your ticket here.

Anger at Boris Johnson throwing ambassador "under a bus"

Now we have a glimpse of the future if and when Boris Johnson becomes prime minister: he throws a top diplomat under the bus by failing to back him in case his buddy Donald Trump disapproves – and then denies (to The Sun) it has anything to do with him.

Johnson's refusal to support the ambassador has sent a dangerous signal to all our diplomats around the world. The whole episode shows that the Brexit we are hurtling towards will not be about taking back control, it will be an ongoing national humiliation. It will mean Britain bending its knee to a US president that Sir Kim was right to describe as "clumsy and inept".

The next appointment to Sir Kim's position could well end up being politically motivated, rather than the best person for the job.

Johnson wants a deal with the US if he can force the UK out of the EU “come what may” by October 31. According to the Spectator, he told a Cabinet minister that he saw Trump as "a lifeboat" who could save Brexit.

Everything, including the NHS, is “on the table” according to President Trump, during his State Visit last month.

Without any prospect of a US trade deal, Johnson and his fellow hard-Brexiters are in even deeper economic and political trouble if the UK has exited Europe by Halloween.

Any trade deal will take years and years to close and come nowhere close to making up for lost trade with Europe, with deeply unpopular trade-offs required.

It is why we need a People’s Vote. It is not fair or democratic for 160,000 Conservative Party members to choose our PM, many of whom are voting for a man who is “peddling optimism”, as Health Secretary Matt Hancock quaintly put it, but who shows no moral backbone to protect honest civil servants in order to get a trade deal. It is time to Let Us Be Heard.

Doubts over future trade deal with US

It could be that the Johnson camp fears over a future US-UK trade deal come from serious doubts over whether it will happen at all.

The Telegraph reports on leaked documents which reveal chronic Whitehall staff shortages, lack of progress in key areas and signs that the Americans are losing interest and getting frustrated.

With the British side unable to get “the right people in the room”, talks are falling behind schedule. It is said that the US side believe the UK is delaying the crucial choice of whether to follow US standards or stay wedded to EU standards.

It brings back the fears of chlorine-washed chicken or hormone-pumped beef, which is what the HuffPost says is causing one unnamed senior cabinet minister to suggest that a Johnson-Trump trade deal “will never happen”. Instead of a big all-encompassing deal, it is claimed that a number of sector-specific agreements are more likely.

Pro-Brexit politicians have consistently argued that the UK would easily get loads of lucrative trade deals once we are out of the EU, but it is one with the US that has been seen as a jewel in the crown.

No trade deal with the US will ever be able to repair the damage if we put barriers in place of trade with Europe: business with the EU makes up over 49% of current trade in goods and services, while the US provides less than 15%. The politicians are failing the people and it is time to Let Us Be Heard as only a People’s Vote can resolve this ongoing political crisis.

We need more ships: Grayling is back

We haven’t heard from transport secretary Chris Grayling for a while, but he is back in the news because we are likely to need more ferries as we are head towards a hardline Brexit on October 31.

Last time, his bad procurement deals cost the country a staggering £51m, including hiring a ferry company that owned no ships. And Eurotunnel sued the Department of Transport successfully for a further £33m over the secretive contracts.

Now the Public Accounts Committee are urging Mr Grayling to get out and get more ferry capacity as time is running out. Clearly they want him to not waste more taxpayers’ money in the coming few weeks.

A confrontation with the nominee to lead the European commission, Ursula von der Leyen, is coming rapidly as she signalled yesterday that she would not renegotiate the current Withdrawal Agreement that has failed to pass through Parliament three times if her position is approved – and said the Irish backstop is “precious” and must be defended.

Shadow foreign secretary Emily Thornberry has stood across the dispatch box from both Boris Johnson and Jeremy Hunt and is now preparing to go into Mr Johnson's constituency backyard of Uxbridge on Sunday to address our Let Us Be Heard rally.

She will be among the speakers to give democratic voice against Brexit being forced on us. Join us to let the favourite for the Conservative leadership election know that we need to be heard. 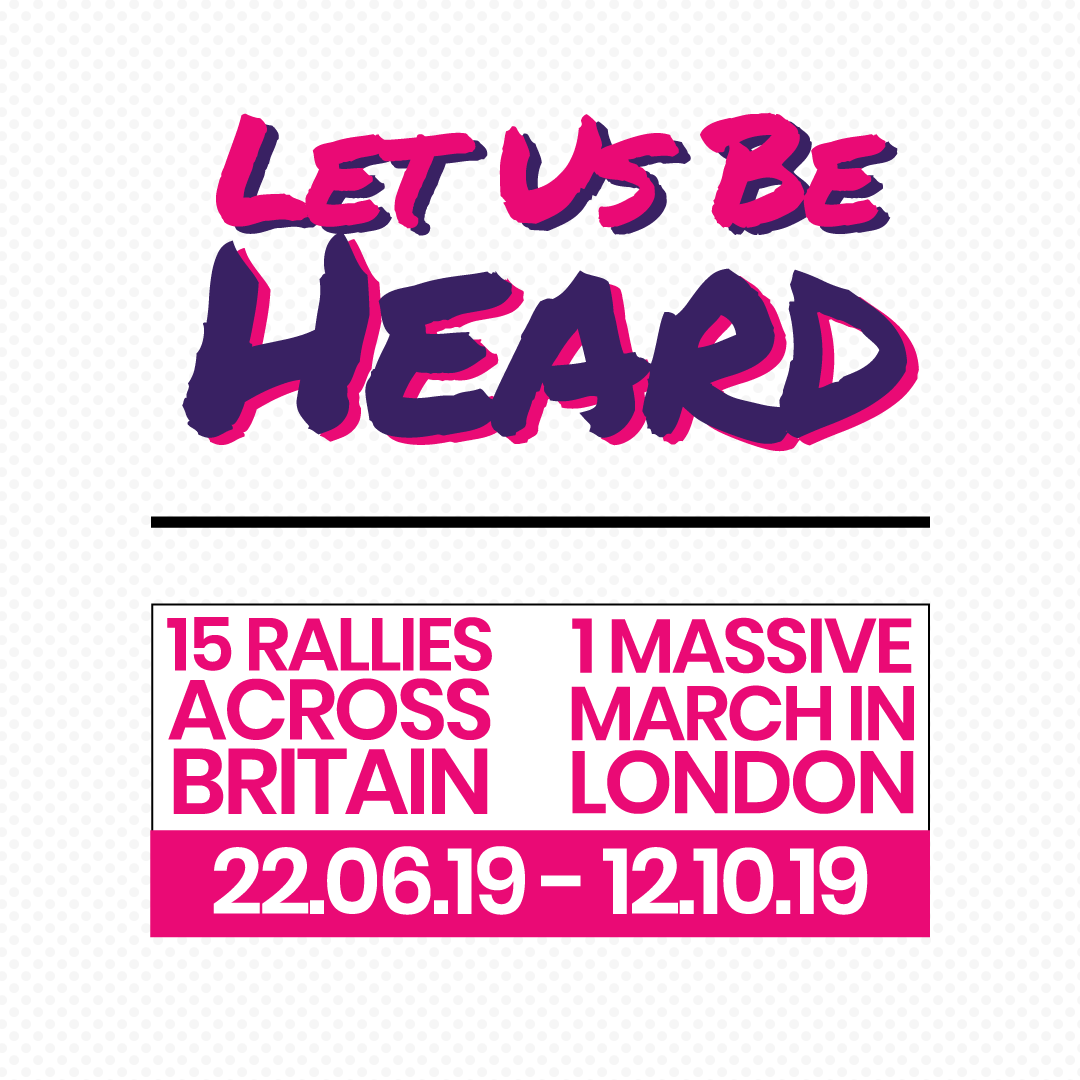 “This episode shows that the Brexit we are hurtling towards will not be about taking back control, it will be an ongoing national humiliation. It will mean Britain bending its knee to a US president that Sir Kim was right to describe as ‘clumsy and inept’.

“The Brexit crisis has now become a simple matter of defending our democracy. We cannot allow a new prime minister to impose their version of Brexit on the rest of us while giving the people no say.”

Ian Murray MP, member of the Foreign Affairs Committee and People's Vote supporter points out that, far from Britain taking back control, we are now bowing down to US president Donald Trump. 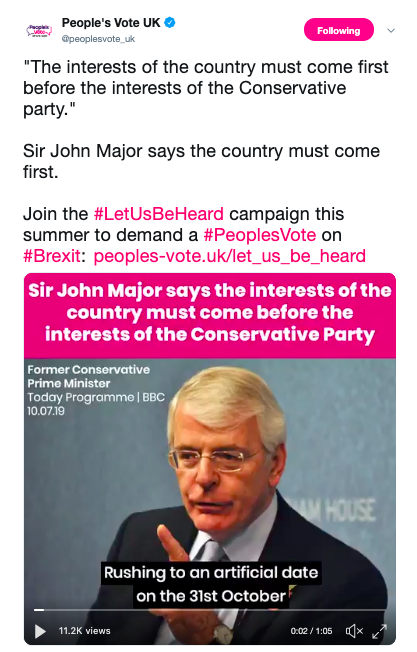 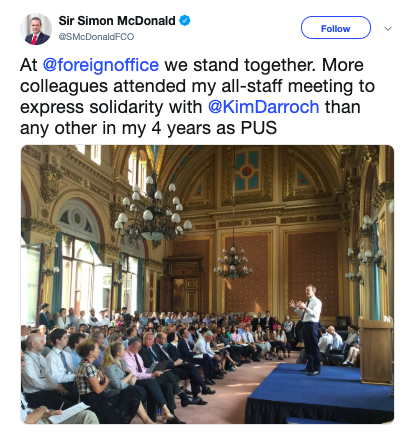 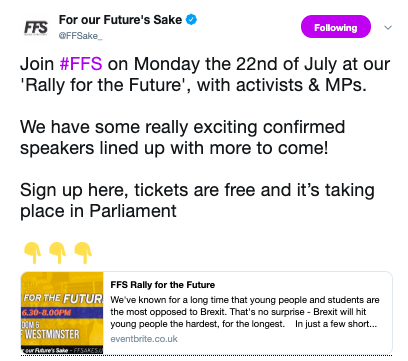 Branson warns pound to plummet in No Deal (BBC News)

Jeremy Corbyn: We will stand up against any type of Tory Brexit (Mirror)

Will Johnson's bluster over No Deal collide with reality? (FT £)

David Aaronovitch: Johnson is positively not a man with a plan (Times £)