Soubry – the Backstop is the ERG’s excuse, not its reason - People's Vote

Soubry – the Backstop is the ERG’s excuse, not its reason

The People’s Vote campaign have today (Wednesday) published new analysis into the real motivations of the 118 Conservative MPs who voted against the Prime Minister’s Withdrawal Agreement.

With the Prime Minister claiming the only barrier to getting her deal through is MPs’ objections to the Backstop, the analysis shows a very different picture.

“Never Mind the Backstop” shows that only 20 of the 118 objected to the Withdrawal Agreement solely on the basis of the Backstop – with many more having significant and fundamental objections based on the way the deal would make the UK a rule-taker, did not match the promises made in the referendum, the “divorce bill” and many other issues. 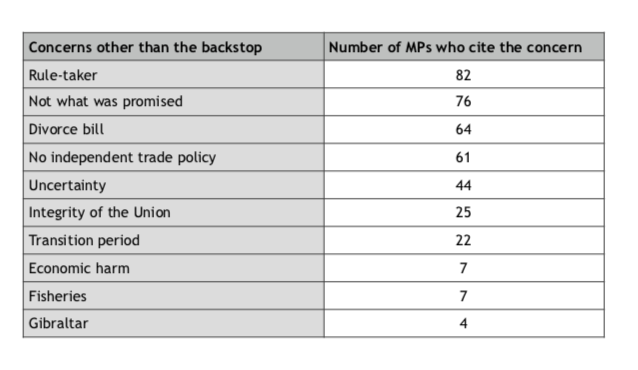 “What last night’s votes confirmed is that there is no majority for either a ‘no deal’ Brexit or for the Prime Minister’s original plan – which even Theresa May herself now does not support.

“My appeal to my colleagues on the Conservative benches is not to allow themselves to be used by those determined to force a no deal Brexit on the country.

“As this dossier shows, the vast majority of the hardline pro-Brexit MPs in the Commons have far deeper objections to the Prime Minister’s Brexit deal than with the Northern Ireland Backstop.

“Those hardliners voted for Graham Brady’s amendment last night as part of their wider effort to kill the deal in total, because they know there is no serious prospect of the Withdrawal Agreement being renegotiated. They have relied on the sincere concerns of many colleagues about what the deal means for Northern Ireland to advance that cause, but this is a temporary party unity based on a false prospectus. The ERG leopard has not changed its spots.

“There is no form of Brexit that fulfils the promises made for it in 2016, or is as good a deal as the one we have as members of the EU, or will prevent this crisis carrying on forever as successive governments go back and forth to Brussels for more and more negotiations and renegotiations.

“Instead of embarking on a further round of fantasy Brexit all of us in Parliament need to decide whether to force through a deal that no one voted for and we would all live to regret – or recognise that the only way forward is a People’s Vote.”

The analysis is available here.