Roadmap to a People’s Vote: The Route Opens Up - People's Vote

Roadmap to a People’s Vote: The Route Opens Up 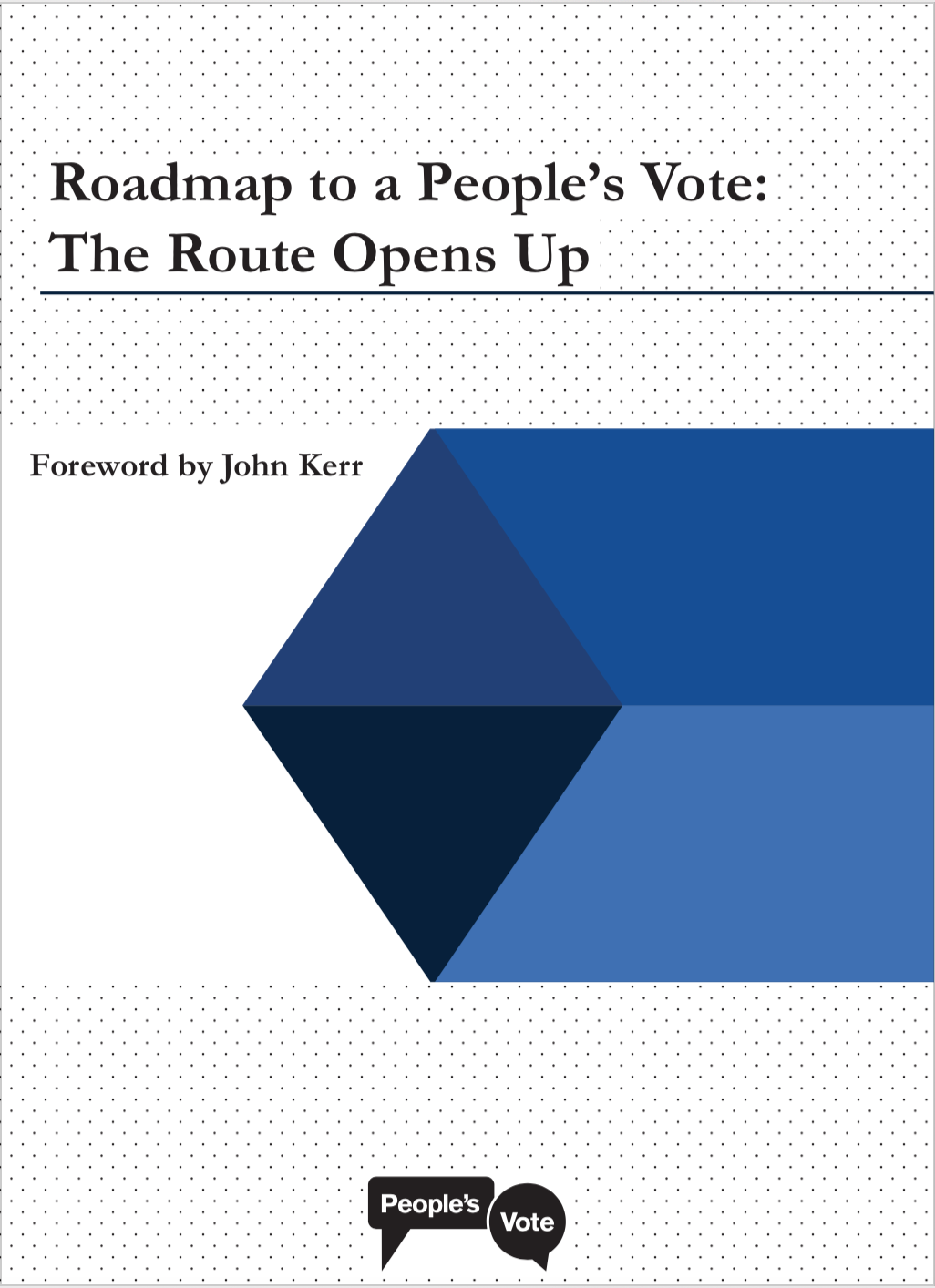 After the House of Commons last night voted decisively against leaving the EU with no deal, the People’s Vote campaign today publishes an updated version of its roadmap towards securing the democratic right of UK citizens to have the final say on Brexit.

Roadmap to a People’s Vote: The Route Opens Up sets out, for the first time, the campaign’s preferred parliamentary route to securing the necessary legislation for a new public vote. This would see MPs reject the Brexit deal when the meaningful vote goes before the Commons in the coming days and then amend the subsequent motion that the Government would be required to bring by mid-February.

The new document emphasises that since September, when the first edition was published, the route to a People’s Vote has opened up in four ways.

The document also makes clear that there will be little tolerance from the EU for fresh efforts to negotiate a so-called “cake-and-eat-it” deal which crosses the EU’s 27 red lines. In these circumstances, there is no point in Parliament having a series of “indicative votes” on possible ways forward if they include proposals for Brexit that have not been negotiated or agreed with the EU. Nor would there be much sympathy in the EU for a request by the UK to extend Article 50 if it was simply for another round of negotiations over such “cakeist” proposals.

However, if the UK asked for an extension of Article 50 so that it could hold a democratic People’s Vote with an option of staying in the EU, the report concludes that the 27 other member states are unlikely to stand in its way.

Lord Kerr, the former head of the UK’s diplomatic service who wrote the original roadmap and drafted Article 50, said:

“There now is a withdrawal deal on the table and it hasn't been well received. Parliament has made it clear that it will intervene to prevent a no deal Brexit. There is a viable third option: we could retain the deal we already have as a full member of the EU. Parliament can step in to insist that the people should have the right to decide. If UK now seeks the necessary postponement of the 29 March deadline in order to hold a People’s Vote, the EU27 would willingly agree.

“How would the people vote? The polls now show a consistent eight per cent lead in favour of staying in the EU. Strikingly the margin rises to between 16 and 26 points if responders are asked to choose between keeping the deal we now have and either of two specified options for leaving: the Government’s deal, or no deal. These are facts MPs of all parties might wish to keep in mind as they consider the options the Government is now offering. They should reflect on how the will of the people can be best expressed now that the public can make an informed choice.”

The full report is available to download here or at https://bit.ly/2AA0S7u