20 October March for the Future

People's Vote and The Independent March for the Future 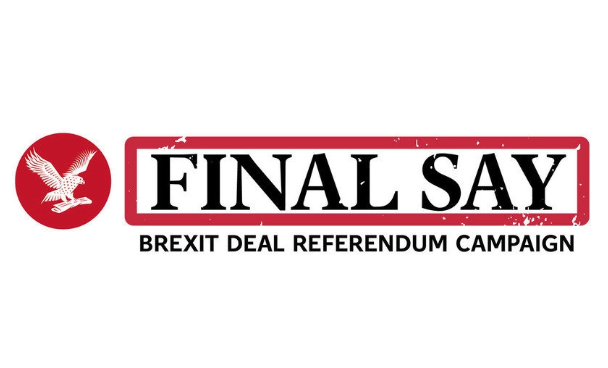 The call for a People’s Vote and a final say on Brexit is getting louder by the day.

In June, more than 100,000 people from all walks of life marched on Parliament to demand their democratic voice is heard.

A crisis is coming this Autumn when MPs will have to decide whether to make our country poorer, trash our vital public services and wreck the life chances of the young or give us all a People’s Vote on any Brexit deal.

So we are planning an even bigger march, this time led by young people whose voices were ignored two years ago, that will make political leaders sit up and take notice.

The People’s Vote March For The Future will be the most important protest of our generation.

We have teamed up with The Independent’s Final Say campaign to make sure this protest is so loud and so big that no one can ignore it.

WHERE AND WHEN ARE WE MARCHING?

We will then march to Parliament Square where we will hear speeches in support of a People’s Vote from 1400pm.

We want to make the People’s Vote : March for the Future as accessible and inclusive as possible. To help us achieve this, we have created a full accessibility guide for the event. To load this map download it, please click here.

Can you help us to deliver leaflets promoting the march in your area? If so, please click here to find out more.

Do you want to be part of the team that makes the People’s Vote: March for the Future happen? We need to recruit a team of over 100 volunteers to help us on the day in a variety of exciting roles that are central to delivering a successful event. To find out more, or to put your name down, please click here.

Local groups up and down the country are organising coaches to travel the People’s Vote : March for the future. Click here for this and other transport details.

We want to make the People’s Vote : March for the Future as accessible and inclusive as possible. To help us achieve this, we have created a full accessibility guide for the event. To download it, please click here.

The assembly area, accessibility points, and march route can be seen in the map above. To load this map on your phone, and see additional information such as toilet locations, click here.

WHY WE ARE MARCHING

A majority of the public support a People’s Vote and a final say on the Brexit deal.

Whether you voted leave or remain, nobody voted to make this country worse off, to harm jobs, to damage the NHS, to affect the future of millions of young people, or to make this country more divided. The more the shape of the final Brexit deal becomes clear, the more it is clear that it will do nothing to improve social justice, reduce inequality, increase our standard of living, or create a better future for future generations.

We are demanding our democratic voice be heard on Brexit. Since the referendum in 2016, new evidence has emerged on what we were once told would be “the easiest deal in history”. We now know the true cost of the divorce bill, as well as the impact of Brexit on the NHS, workers’ rights and public services.

This Government has failed on Brexit: there is no mandate for its car crash proposal or for a disastrous no-deal Brexit. We won’t let them get away with a bad deal - that’s why we will be there in Central London making the case for a People’s Vote.

Clear your diary, bring your family, tell your friends about the March on October 20th.

The People's Vote campaign is an alliance of the following organisations who are united around the demand to give people a vote on the outcome of the Brexit negotiations.