The People’s Vote campaign is today (Thursday) launching a new advertising campaign featuring an image of Boris Johnson in the pocket of Nigel Farage.

The campaign is designed to highlight how Nigel Farage’s destructive No Deal agenda is driving the race to become the next Prime Minister, with the front-runner Boris Johnson increasingly adopting the hard-line position of crashing our country out of the EU without a deal on 31 October.

The campaign will be launched with an ad van which will park outside Bournemouth Pavilion later today, the venue for the latest hustings event in the Conservative leadership contest.

A spokesperson for the People’s Vote campaign said:

“Nigel Farage has got Boris Johnson in his pocket. Farage’s extremist vision of Brexit has been adopted by both candidates to become the next Prime Minister of our country, but it’s Boris Johnson, the front-runner, who is increasingly talking up the Farageist vision of a destructive No Deal, ‘Do or Die’.

“Nigel Farage has failed seven times to be elected to Parliament, so it’s completely undemocratic to allow him to dictate the direction of Brexit, the most important issue that has faced our country in generations. And it’s outrageous that only 160,000 Conservative members, representing just 0.25% of the population, many of whom voted for the Brexit Party at the European Elections, will be the only ones to get a say on where we go with Brexit.

“With Boris Johnson in Farage’s pocket, the only way to deliver a lasting and stable conclusion to the Brexit crisis is to let the public have the final say. That’s why the People’s Vote campaign has launched an all-out offensive with rallies and events across the entire UK through the summer and into the autumn, culminating in another huge march through central London on October 12. It’s time for the public to be heard.”

More about the People’s Vote Let Us Be Heard campaign can be read here: https://www.peoples-vote.uk/let_us_be_heard

Operational details for the ad van today are here, including the image to be used:

Today (Thursday), ahead of the Conservative leadership hustings taking place in Bournemouth, the People’s Vote campaign has commissioned an ad van showing a picture of Boris Johnson, the frontrunner to become the next Prime Minister, in the pocket of Nigel Farage: 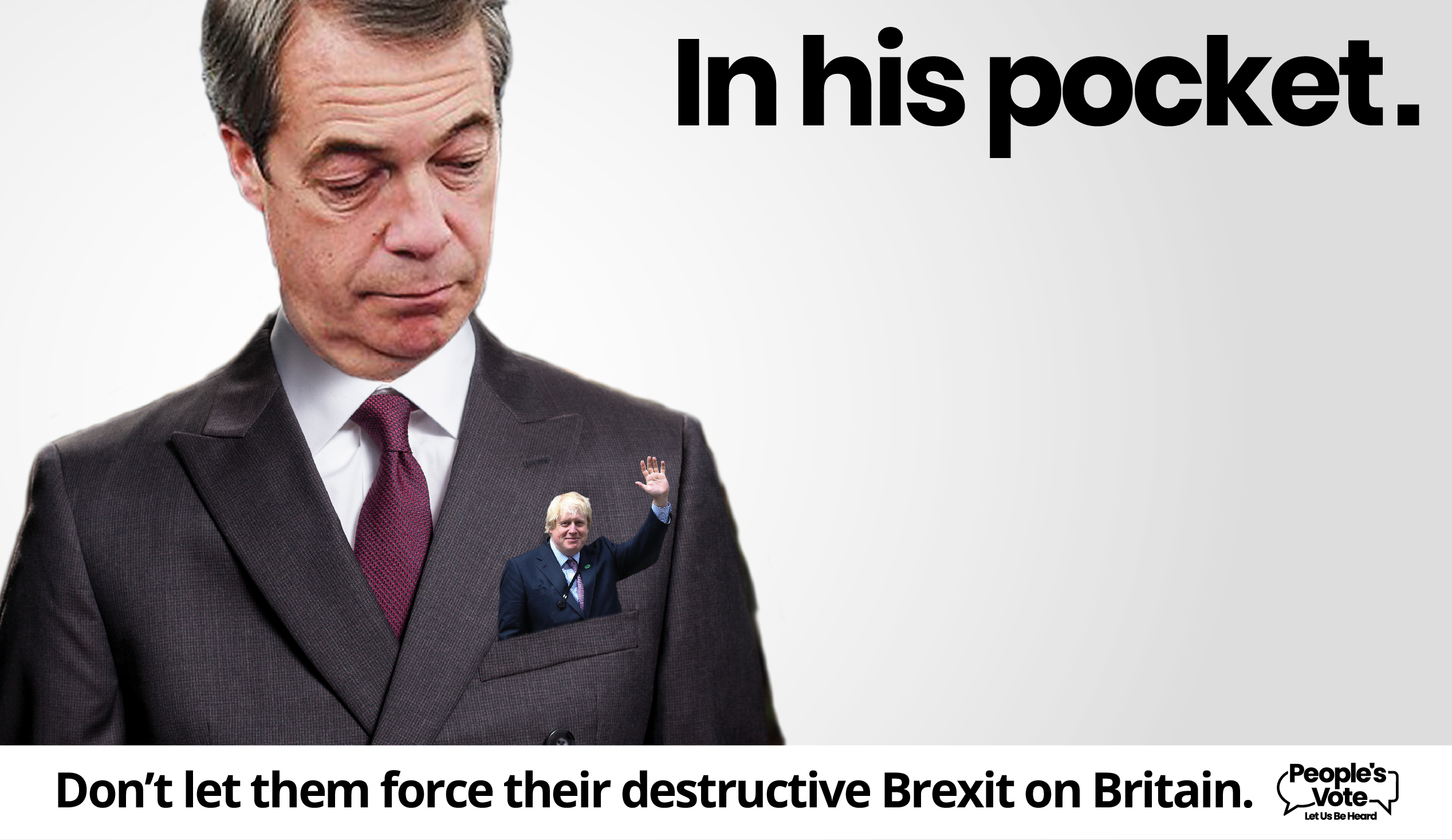 1300-1800 – Ad van will drive round high-footfall areas of Bournemouth, including the station, the town centre and the beach area

1800 – Ad van scheduled to arrive at Bournemouth Pavilion, the venue for the Conservative leadership hustings