Morning Briefing: Trump flies in hoping for a UK fire-sale

It's going to be a big political week. President Trump is arriving in the UK determined to have his say over Brexit, the Conservative leadership contest and a future UK-US trade deal. MPs return to continue the "zombie Parliament" tomorrow, the Conservatives (now 13 candidates) and Lib Dems continue leadership contests and on Thursday there is a by-election in Peterborough, previously held with a wafer-thin majority by Labour, where the first Brexit Party candidate may win a seat.

Everything "on the table" as Trump flies in

President Trump is arriving for a State Visit today and, as usual, controversy precedes him. Trump's support for a no deal Brexit and his fellow right wing populists Boris Johnson and Nigel Farage makes the prospect of a new post-Brexit trade deal alarming. He is clearly licking his lips at the prospect of a "very big" trade deal".

His ambassador in the UK, Woody Johnson, a close friend, has confirmed that “the entire economy, everything that is traded, would be on the table” in any deal that Donald Trump makes with post-Brexit Britain.

In a BBC interview yesterday, Mr Johnson said US negotiators were already looking at the different components of a trade deal between with the UK so “when the times comes, we’re ready to go”. Asked if that included health care, he replied, “Yes, I would think so.”

And, when questions about issues like food and animal welfare standards, the Ambassador made clear the US Administration’s determination to bypass existing European laws so that the only control about what goes on our plates would be a personal decision by the British consumer.

“If they don’t like it,” he said of chlorinated chicken, “they don’t have to buy it.” 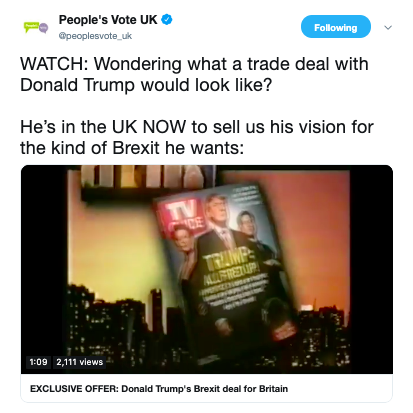 Brexit Party supporters aiming to pick the next Prime Minister

New evidence shows that Brexit Party supporters have joined the Conservative Party with the specific purpose of voting not only for a new party leader but to choose the UK’s next Prime Minister.

Research conducted by the People’s Vote campaign has found dozens of Brexit Party supporters who openly claim to have joined the Conservative Party in order to vote in a leadership contest.

They include individuals who have been reported to Conservative chairman Brandon Lewis for Islamophobic posts. One has called for a “total ban on Muslim immigration” and another who said he is “appalled by the number of adverts showing non-whites”.

A You Gov poll published this week shows less than one in five Conservative Party members voted for their party in the recent European Parliamentary elections.

But an extraordinary 59% of those Conservative members surveyed backed the Brexit Party.

Although a large number of these are likely to be long-term Conservative members angered at the Government’s failure to deliver promises made for Brexit that could never be kept, it also suggests that Brexit campaigner Arron Banks has been successful in his efforts to get thousands of Nigel Farage’s supporters to join the party.

Indeed, the Conservatives have announced that the party now has 160,000 members, a rise of 36,000 in the last year and close to the 30,000 that Banks claims to have recruited. After perhaps the most disastrous and unpopular period in government for the Tories in a generation, a significant rise in membership would normally be the last thing the party expected.

A number of MPs and local association officials have reported a sharp increase in applications, with Nick Boles claiming: “There has been a systematic operation of infiltration of the Conservative Party by UKIP and UKIP sympathisers.”

Former Justice Minister and People’s Vote supporter Phillip Lee has been attacked with a no-confidence motion in his local party by a former UKIP opponent who has now joined the Tories. Mr Lee said he is worried that the “sensible and decent” members will not have the chance to pick the next leader, but extreme Farageists.

But there are those fighting for a People's Vote within the Tory Party. Yesterday party grandee Lord Patton told Radio 4 that he "reluctantly" supported a new public vote, having come to recognise that it is the only way out of the crisis. And the 13th candidate for the leadership election is People's Vote supporter Sam Gyimah.

Blunkett leads calls for removal of clique around Corbyn

Pressure continued to grow over the weekend on Labour leader Jeremy Corbyn over the party’s position on a People’s Vote, but also on the advisors surrounding him.

Former home secretary David Blunkett, writing in the Observer, called for the removal of advisors Seumas Milne and Karie Murphy and the end of Unite leader Len McCluskey's influence.

He wrote: “Milne and the little clique around Corbyn have their own agenda, which is all about power in the party without regard to power in the country. Corbyn has rightly adopted the slogan ‘The many not the few’, but steadfastly refuses to listen to the many and listens only to the few.”

Houghton and Sunderland South MP Bridget Philipson called for a People’s Vote, saying that even though the majority of her constituents voted for Brexit, a no deal exit would rip the town apart.

The European Banking Authority quietly packed up its bags and move to Paris last week from its old HQ in Canary Wharf. It is another example of the UK losing its influence in the EU as we head for a potential Brexit.

It's not a massive loss of jobs - only around 150 were here - but City-watchers fear that it is the UK's important financial services industry that will suffer in the long run.

“Parliament is deadlocked, we all know that, we want to move forward and we want to be able to bring the country together. And that is why I think a final say on the Brexit deal is the way to achieve that.”

The 13th Tory Party candidate Sam Gyimah is the first to call for a People's Vote.

Kate Vickers from For our Future's Sake gives her views on the State Visit of US President Donald Trump. 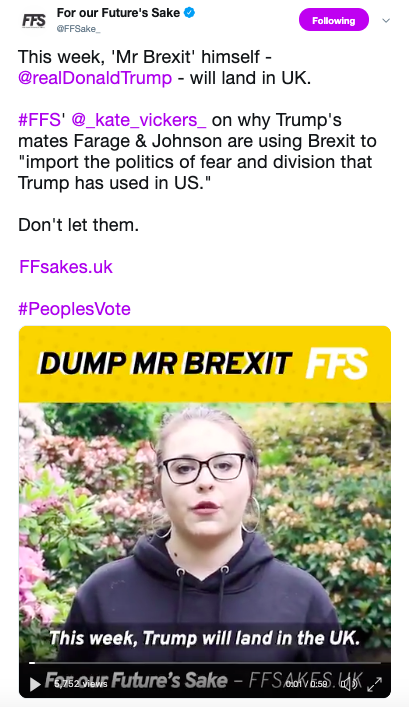 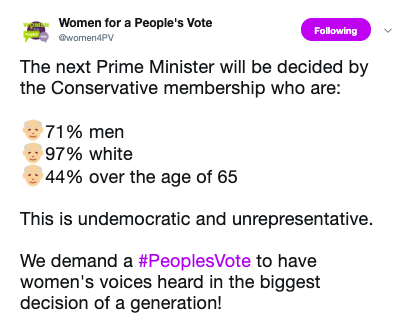 NHS "on the table" in post-Brexit US trade deal (HuffPost)

Trump on his way for state visit (Sky News)

David Blunkett: Corbyn won't listen to the many, he only heeds the few (Observer)

Trump trip II - no happy ending for May (Politico)

Andrew Rawnsley: It's not his enemies but his erstwhile friends who are alarming Corbyn (Observer)