Morning Briefing: More than 230,000 sign our letter from the People to the Powerful

If there was a moment that captured the power of Saturday’s massive million-strong march, it was the spontaneous roar that erupted in Parliament Square when the Letwin motion was won.

It swept like a tidal wave back up Whitehall: a joyful, spine-tingling cheer recognising that Boris Johnson’s attempt to force through his damaging Brexit plan without scrutiny had failed, and that the opportunity to secure a People's Vote on it is now in sight. 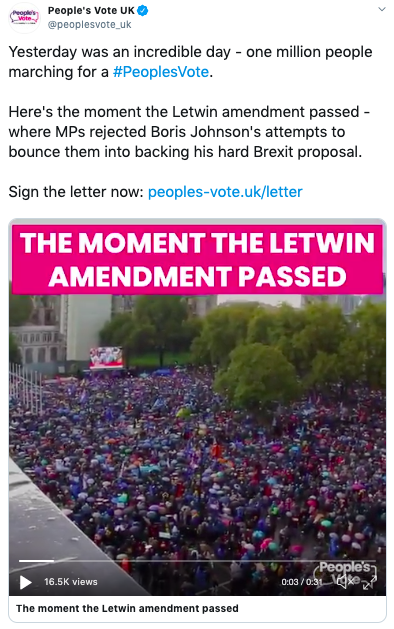 We thank each and every one of you who came from all over the UK to make your voice heard in such a passionate way. MPs could hear the roars inside the House of Commons as Johnson tried to shove through his sell-out deal.

We need to keep the pressure on now. Keep up the momentum. More than 230,000 people have signed our letter from the People to the Powerful demanding a Final Say on Brexit.

All eyes are back on Westminster and Speaker John Bercow today as Johnson will try to force his bad Brexit deal through after being thwarted by MPs on so-called super Saturday.

The Speaker needs to make a decision this afternoon on whether the government can bring the same motion back, with ministers such as Dominic Raab going on TV to claim they have the numbers to win a vote.

Meanwhile, ministers will also introduce the Withdrawal Agreement Bill as they continue their attempts to take the UK out of the EU by 31 October. Whitehall officials said there will be "long hours" in the Commons and potentially weekend sitting for the House of Lords in order to get the legislation passed in time.

Labour are trying to pull together another cross-party alliance of opposition, with signs that the DUP is softening its opposition to a People’s Vote in an amendment vote this week.

Bringing in a customs union amendment is also being discussed, but we've been down this road before and it isn't the answer. Putting lipstick on this pig of a deal will still leave us with a pig and only a People's Vote can get us out of the Brexit stalemate.

One of the beauties of our People’s Vote rally was to see on stage the cross-party backing for a Final Say, with politicians ranging from John McDonnell and Keir Starmer to Jo Swinson, Caroline Lucas and Antoinette Sandbach, Joanna Cherry to Anna Soubry, Hilary Benn standing strong with Dominic Grieve, Conservative grandee Lord Heseltine and young campaigners from our youth groups For our Future's Sake and Our Future Our Choice.

It is imperative that they continue to work together.

The EU are waiting and watching, having received the unsigned letter from Johnson requesting an extension to Article 50.

There are just 10 days to the Brexit deadline and only a Final Say vote can resolve this crisis.

Green MP Caroline Lucas is appealing for supporters to chip in to keep battling for a Final Say.

She said: “In the coming days Boris Johnson will try every trick in the book to get his way. He has already spent £100m of taxpayers' money on pro-Brexit propaganda. But almost everything we do is now entirely paid for by online donations averaging just a few pounds.

“People like you have given us the money we need to pay for our march yesterday, our rallies through the summer, our advertising, our leaflets and our work in Parliament.

“We are a people-powered campaign now entering the most crucial phase.

Can you chip in to help us?” 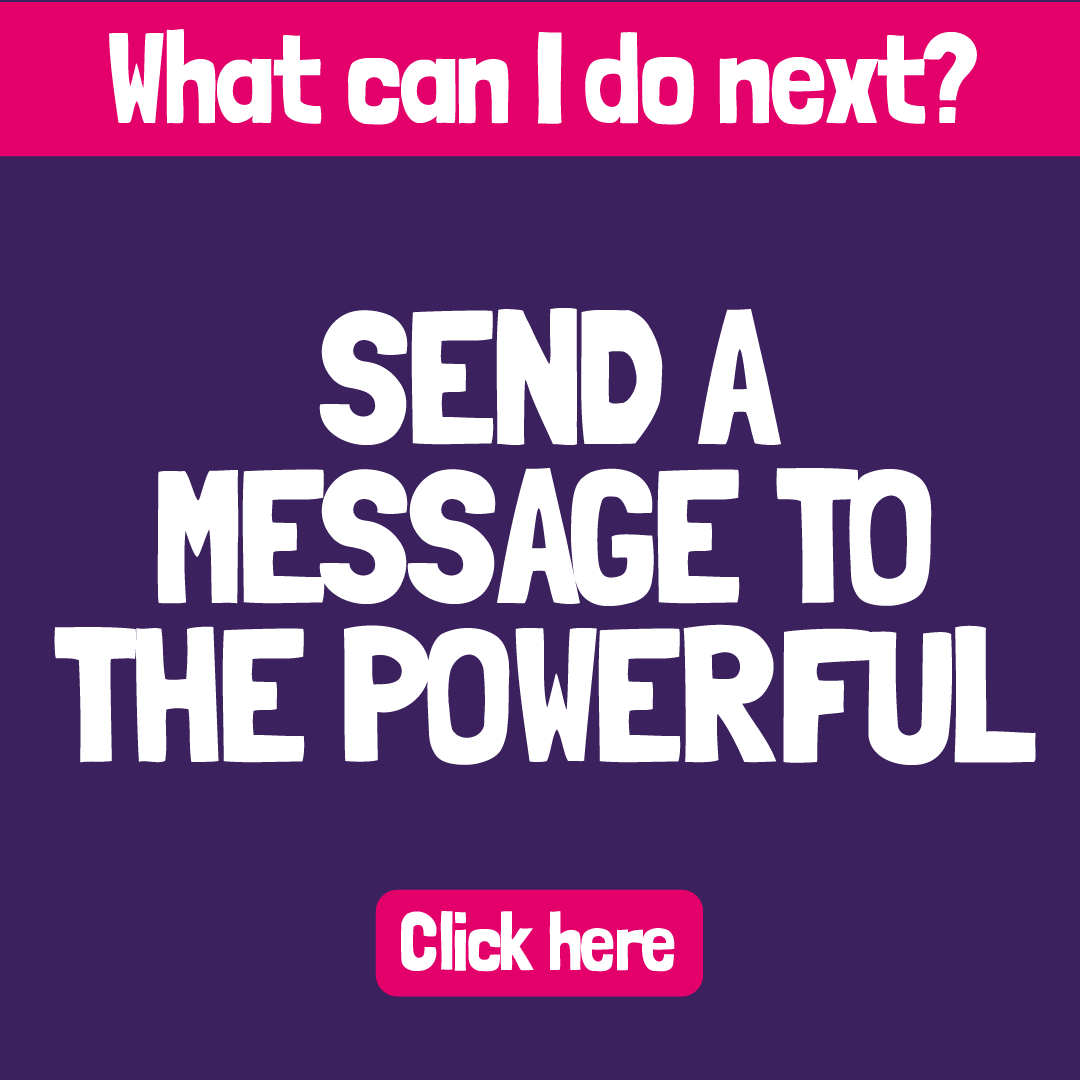 "From the Highlands, to Belfast, from Cardiff to Penzance, people came from across every corner of the land to make themselves heard. Whether they'd marched before, or this was their first time marching, they turned up today to march together because the democratic solution is for the people to solve this crisis. We will march on!

"And now the Prime Minister must now obey the law and give MPs and the people the time needed to solve the crisis he has done so much to create. That's why we're sending a letter, from the people to the powerful to demand they don't turn their backs and instead give the people the final say. Sign it now." 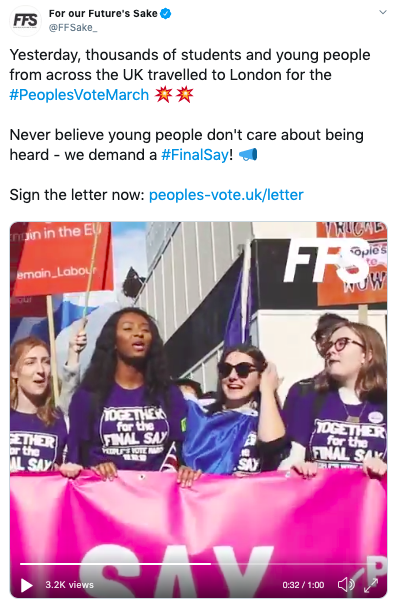 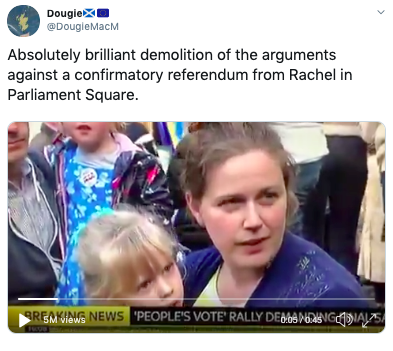 Video of the Day 3 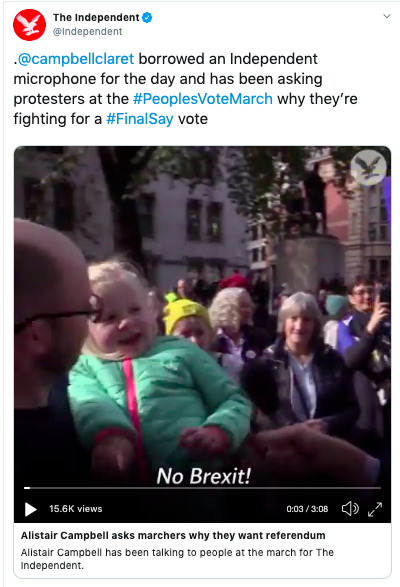 People’s Vote march: from every corner of the land they came, to join a very British rebellion in the rain (Observer)

On the ground with People's Vote marchers (Guardian)

Andrew Rawnsley: Boris Johnson’s Saturday drama turns to farce – and it was all his own fault (Observer)

Timothy Garton Ash: Europe is fed up with Brexit, but it’s still best for all if Britain stays in (Guardian)