It was the 25th anniversary of former Labour leader John Smith's death yesterday and today current party deputy Tom Watson will pay tribute to him - and argue that the popular politician would have backed a People's Vote to get out of "this destructive mess".

Shadow Brexit Secretary Keir Starmer has warned that that any cross-party deal that comes back to Parliament would require a People's Vote with up to 150 Labour MPs rejecting an agreement that didn’t include one.

It is the clearest signal yet from Labour that a People’s Vote is the only way through the chaos – and comes amidst mounting speculation that the talks between the government and opposition are set to collapse as both sides see the damage it is causing their supporter base.

Starmer will be leading much of the Euro election campaign but is nervous that Labour could lose Remain voters: “There is concern in leave areas about whether some of our voters might vote for other parties, but I think there is an increasing concern that some of the Labour remain voters might not vote Labour,” he said. “It is very important that we learn those lessons.”

And he fears that the tenuous position of Theresa May as leader of the Conservatives makes it hard for Labour to trust in a deal: “You don’t normally do a deal with someone who is leaving office.”

Meanwhile the latest YouGov poll shows a surge of support for the Lib Dems and Greens, with Labour clearly suffering as a result of its mealy-mouthed approach to a People's Vote: 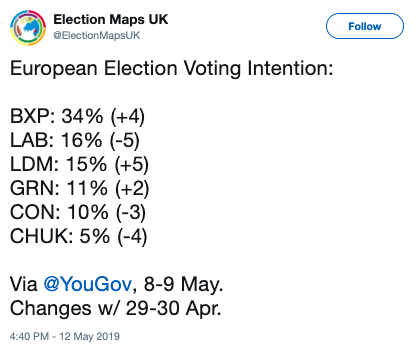 The polling comes as the People’s Vote campaign sent out four leaflets to different parts of the UK endorsing those parties pressing for a new vote, including Lib Dems, Change UK, Green Party, SNP in Scotland and Plaid Cymru in Wales. The Labour Party received qualified backing for Labour with the leaflets pointing out the party has been lukewarm about giving the public the final say and has done the minimum needed to pass the test on a People's Vote.

We are heading into the sixth week since Conservatives and Labour negotiators began trying to figure out a compromise deal, but there is general frustration on all sides at the lack of progress. Labour have been pushing for a customs union, but complain that the Tories are not moving far enough to common ground.

The problem is that there really is no deal that can meet the promises made for Brexit, demonstrating that a People's Vote is the only solution to end the crisis.

Meanwhile former diplomatic service head Peter Ricketts has warned that the next phase of Brexit negotiations with the EU would tie up the civil service for years and be much more complex than the current deal.

The Darling Buts of May

Pressure grows on Prime Minister Theresa May to end the ifs and buts of how long she will remain leader of the Conservatives, while the Farage roadshow continues to scare Tories.

Few remember that Farage did well in 2014 but couldn’t get elected as an MP the following year. Euro elections are important but not a proxy referendum.

One of Farage's weaknesses is that the more scrutiny he comes under, the clearer his deep personal and political flaws become. Yesterday he lost his temper on Marr (see Video of the Day, below) and this morning he's under pressure after endorsing tropes beloved of anti-semites.

Lib Dem's Jo Swinson said: "To say today that he always advocated 'no deal' is a mark of just how shameless he is, and how little he cares for the jobs and livelihoods of the people of this country."

The Times reported that Theresa May was under pressure to pull the plug on talks with Labour and move towards a set of indicative votes.

"To say today that he always advocated 'no deal' is a mark of just how shameless he is, and how little he cares for the jobs and livelihoods of the people of this country."

A busy week of campaigning for local People's Vote volunteers all over the country. 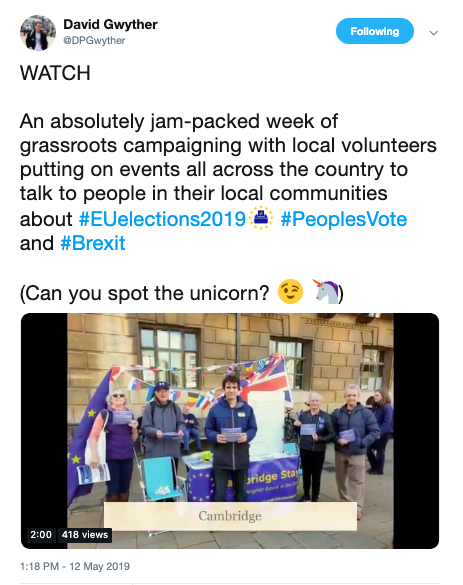 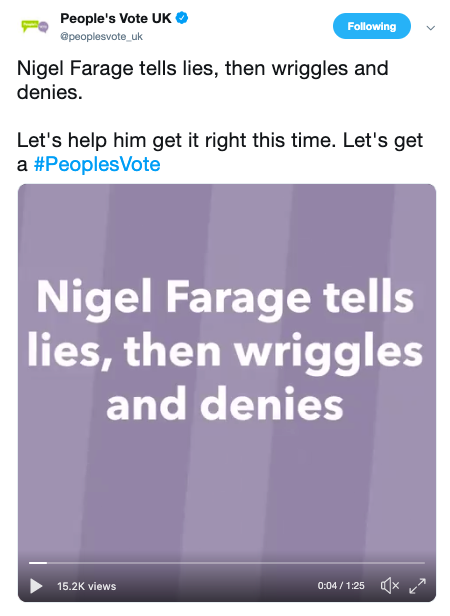 Tony Blair: Farage cannot be allowed to dictate Britain's future. He must be thwarted (Guardian)

Matthew D'Ancona: Both Labour and Tories have gone AWOL on Brexit (Guardian)