A People's Vote is the only way forward out of the political crisis we are in. But we need to win more support and keep the pressure on our politicians at the grassroots, where real change happens.

Now is the time for us to kick on, take to the streets and win the argument for a People's Vote.With activities most weekends and a huge Action Day coming up soon, now is a crucial time to get involved.

The Lib Dems have surged into first place ahead of Labour, the Conservatives and the Brexit party, according to a bombshell new poll into general election intentions.

As Jeremy Corbyn continues to fudge the issue of Labour backing a People’s Vote, it demonstrates Labour's urgent need for a definitive statement.

Each time he appears to move closer to coming out in favour of a People's Vote, he introduces another level of the ambiguity that caused such dire results in the European elections.

The firmly pro-People's Vote Lib Dems topped the Times/YouGov survey with 24 per cent, the first time it has been in the lead since 2010 under Nick Clegg’s leadership.

Support for the Brexit Party, which came first in the European parliament elections on 31.6 per cent, dropped back. Twenty-two per cent of voters would back the party if a general election were held now, the poll found. The Tories and Labour were tied on 19 per cent, with the Greens on 8 per cent. 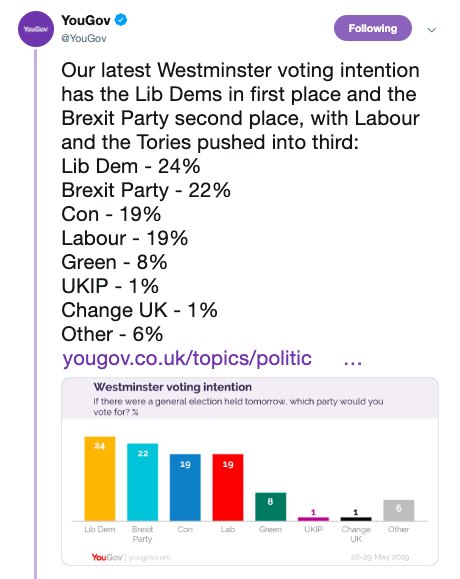 People’s Vote supporter Ben Bradshaw MP commented: “This poll explodes the  claim of some Labour figures that the millions of voters we lost to parties which clearly support a referendum on any Brexit deal and Remain will automatically  return to us at the general election. They won’t. Faced with the prospect of a new unelected Tory Prime Minister hell bent on crashing us out of the EU in a no deal Brexit, Labour voters and members are demanding clarity. We need to move very fast and commit unambiguously to a referendum on any Brexit outcome with Remain on the ballot. If we don’t, we risk sliding towards the electoral and national disaster.”

The Labour leader had hedged once again in an interview, saying: “What I do say is that if Parliament can come to an agreement then it’s reasonable, if Parliament wishes it, there should be a public vote on it. But that is some way off.”

Amidst the row over the expulsion of People’s Vote campaigner Alastair Campbell, YouGov data showing that a staggering 41% of party members voted for a party other than Labour. Famous other rebels now include Cherie Blair and former Speaker Betty Boothroyd.

They all lent their votes to parties that gave full-throated backing for a final say referendum. Today's poll shows what many thought was a one-off revolt could become a lasting phenomenon unless Labour changes its position and does so fast.

The Lib Dem rise in the polls comes as their own leadership contest begins with Jo Swinson and Sir Ed Davey both vying to take over from Vince Cable.

The Confederation of British Industry has written an open letter to Conservative leadership candidates (now standing at a dozen in number) warning them against a no deal Brexit.

CBI leader Carolyn Fairbairn says the next prime minister can only claim the Conservatives are the party of business if they secure a Brexit deal that protects the economy, jobs and living standards.

“We need compromise, consensus and honesty to resolve the Brexit impasse, quickly. The CBI urges the next Prime Minister to build their approach to Brexit from the bottom up – from the clear, detailed evidence of firms, on the ground, managing the day-to-day implications for jobs.

Meet the sensible wing of the Conservative Party

With an army of leadership contenders declaring they will march the country over the no deal cliff if elected, it is a relief to see the sensible, pro-business and pro-European mainstream wing of the Tories reasserting itself.

Some of them may be reluctant converts to a People's Vote, but they can see the dangers to their country of no deal and the potential catastrophe of an election if the party fails to deliver Brexit.

And these are not just any old Tories, but senior leaders who have earned their spurs in Government, including three former Foreign Secretaries.

Chancellor Philip Hammond yesterday became the most senior of leading Conservatives to suggest that a People’s Vote is the solution to the Westminster gridlock and to warn of the risks of the alternatives – no deal or a general election.

He suggested he would be prepared to vote against the next Conservative government in a vote of no confidence to avoid crashing out with no deal.

“It’s time for Jeremy Corbyn to stop wriggling and start leading. The overwhelming majority of Labour members and Labour voters now know that giving the public the final say on Brexit is the only way to deliver a lasting and stable conclusion to this crisis."

Ahead of tomorrow's Champions League final, Liverpool coach Jurgen Klopp gives an impassioned view of how politics has gone wrong - and how politicians should do the right thing for the people. 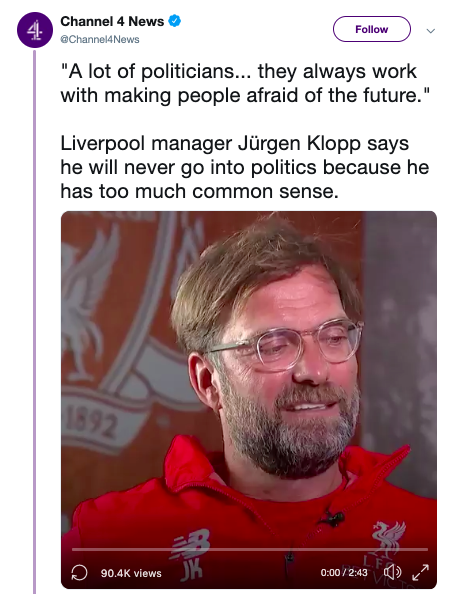 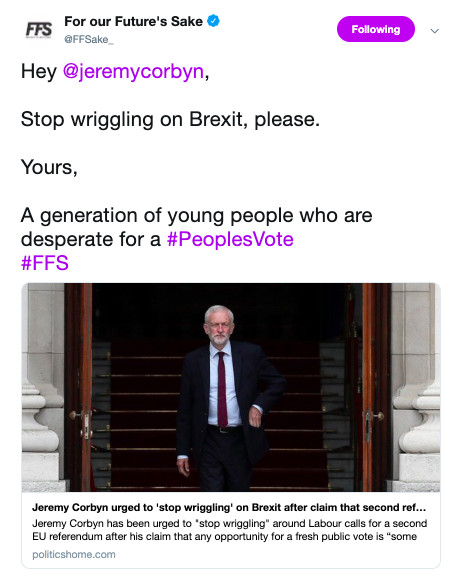 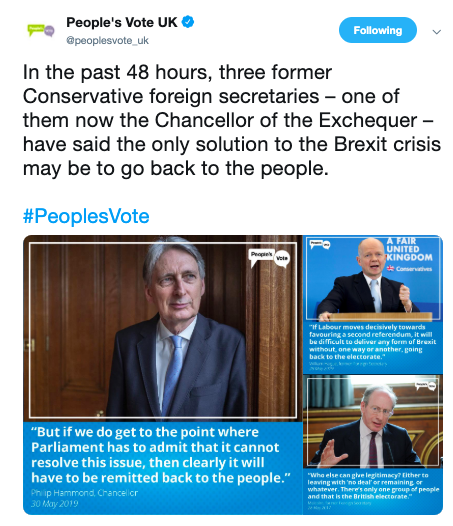 Lib Dems surge ahead in poll (The Times £)

Lib Dems surge ahead of Tories and Labour in poll (HuffPost)

Philip Collins: Brexit has left Jeremy Corbyn a politician out of time (Times £)