Morning Briefing: Now, more than ever, we must make our voices heard

As we head into July, there are just four months to go before the Brexit October 31 deadline. However, given that we are stuck in the middle of an unending private election for our next Prime Minister, there are currently only around 26 days scheduled after the result for Parliament to be open for business.

Whoever emerges as the winner from the swamp of this Conservative leadership contest will be announced as Theresa May's successor on July 23. Within days, Parliament goes into recess for six weeks followed by conference season. The question we ask is how will our future relationship with Europe be determined, at a time when there isn’t even any proper scrutiny of the Government?

Our argument is that no country that regards itself as democratic could take a decision to finalise  Brexit and perhaps impose No Deal in such a fashion. This summer, our demand - Let Us Be Heard - will get louder and louder.

It's time for Cheltenham to cry: Let Us Be Heard

The Let Us Be Heard rally is in Cheltenham tomorrow for the second of our events to protest at the horror of a destructive - possibly No Deal - Brexit being forced on the country without the public having a final say.

It is one of 15 being held in a long hot summer of protest organised by the People’s Vote campaign across the UK before an historic march in London on October 12 ahead of the latest Brexit deadline.

Cheltenham’s Conservative MP Alex Chalk will join the Lib Dem's Vince Cable so that he can explain his position directly to constituents ahead of further crunch votes in Parliament this autumn, where he will again come under intense pressure from local people to give them the final say on Brexit.

A recent Populus opinion poll showed just 34 per cent of voters in the Cheltenham constituency support the No Deal departure from the European Union which both Boris Johnson and Jeremy Hunt – the final two candidates to be the next Conservative leader - say they are prepared to consider.

Next week, it will be the North East's turn to be heard as we stage our third big rally, this time in Sunderland, a city that will always have a symbolic significance in the Brexit debate: get your tickets here.

Boris Johnson is no longer a bumbling figure of fun but very likely to be the next PM: one who appears increasingly on course to take the UK out of the EU without any deal at all.

His boast that he could somehow renegotiate the Withdrawal Agreement or cherry pick the bits he likes was always a fantasy. But disclosure of how he allowed himself to be filmed as Foreign Secretary making schoolboy insults about the French, calling them "turds", underline how far his view of his own diplomatic skills is divorced from reality.

There is a now a clear danger that the arrival of Johnson in Downing Street and the collapse of his Brexit plan would mark a further descent into a No Deal departure from the EU which hardly anyone voted for in the last referendum.

That is why more and more MPs, businesses and voters are turning to a final say referendum as the only democratic way of solving this crisis.

This morning Vladimir Putin is crowing about what he sees as the collapse of liberalism and the rise of populism and nationalism. He throws ugly attacks on migrants and on gay rights into his poisonous mix.

This is where the politics of empty slogans and political showboating leads and democracy must be defended against those who threaten it in this way.

The reality of the threat of No Deal was laid bare yesterday when Peugeot warned they could pull out of building the Vauxhall Astra at their Ellesmere Port plant if a destructive No Deal went ahead.

The declaration from the Vauxhall owners that they would go ahead with the new model in Cheshire is dependent on the final terms of Brexit and No Deal would undoubtedly move them to pull the plug and go elsewhere in Europe.

So now Boris Johnson and Jeremy Hunt (and the British people) know that at least 1,000 jobs – and the future of the beleaguered British motoring industry – is on them.

It came after Japanese foreign minister Taro Kono warned his “friends” Boris Johnson and Jeremy Hunt that No Deal would result in disaster for 1,000 Japanese companies operating in the UK and there would be no rolling-over of the current EU-Japan trade agreement which had been predicted to give the UK economy a £3billion boost.

And the Society of Motor Manufacturers and Traders warned that a “seismic” No Deal would cost the industry £50,000 a minute, just from border delays. Combined with World Trade Organisation tariffs, No Deal would be a “knockout blow” to competitiveness.

People’s Vote campaigner Anna Turley MP said: “Hunt and Johnson have no right to force such a charter for job destruction on us. It is disgraceful that they would happily barter away families’ livelihoods and young people’s futures to win an internal party election.

“That is why more and more people, including a growing number of Conservative MPs who are willing to put the national interest ahead of the party interest, are joining the demand for a People’s Vote.”

The motor industry employs 168,000 people in the UK – more than are able to vote for the next prime minister. It is time to Let Us Be Heard.

Jeremy Corbyn's painfully slow, foot-dragging strategic shift to support a People's Vote, is now frustrating even his closest allies in politics and the media.

Owen is something of a bellwether for the left and his conversion to the view that Labour supporting a People's Vote has become inevitable is a clear sign it will happen... eventually. 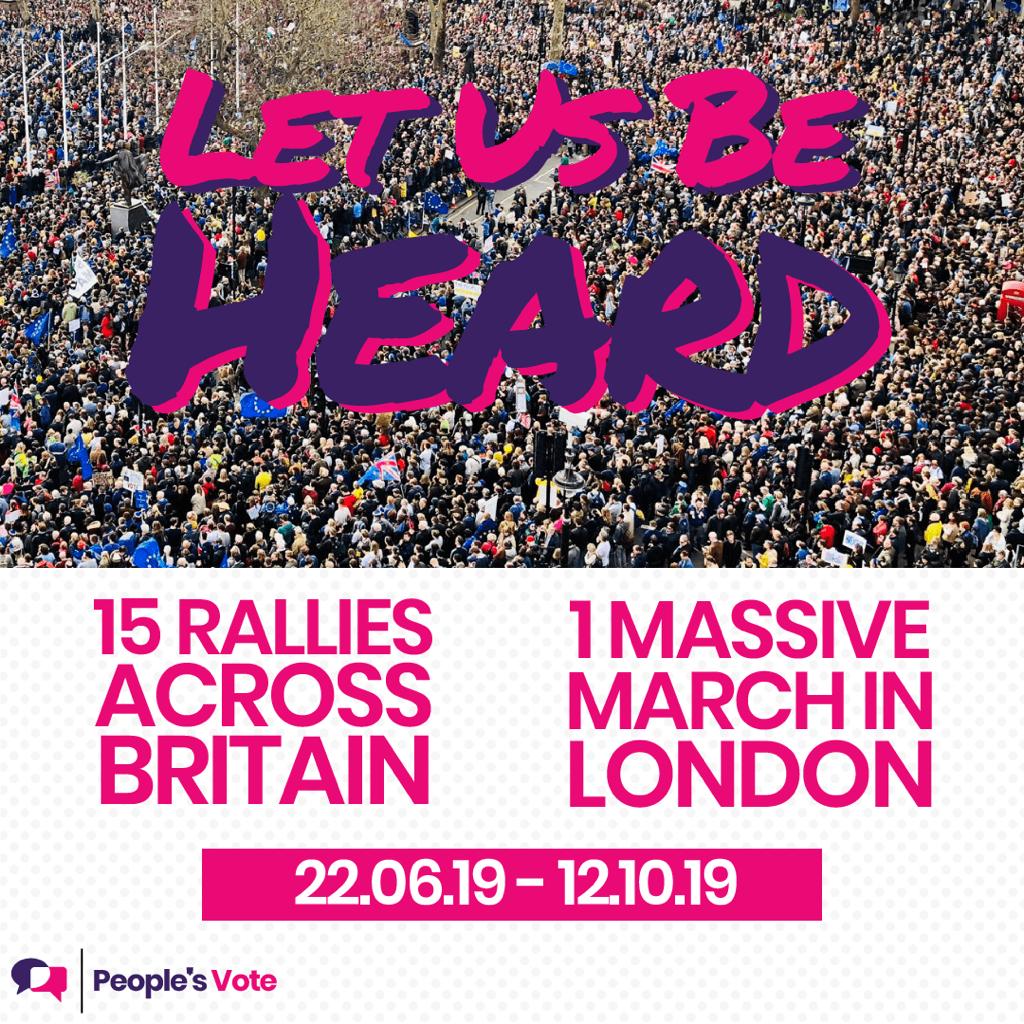 "We need to fight to have our say on whether we go through with a Brexit that will deepen the divide in our society, make us poorer, put our NHS, our Universities and Colleges, our jobs, and human rights at risk, or whether we choose to have a People’s Vote.”

Hillary Gyebi-Ababio, a student leader at Bristol University will warn our Cheltenham rally that the latest Brexit plan is a "recipe for destruction" for young people.

Richard Walker, Managing Director of supermarket Iceland, reveals on Question Time how he has changed his mind over Brexit and now supports a People's Vote. 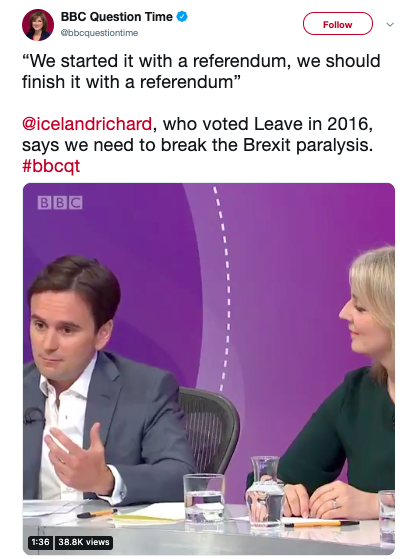 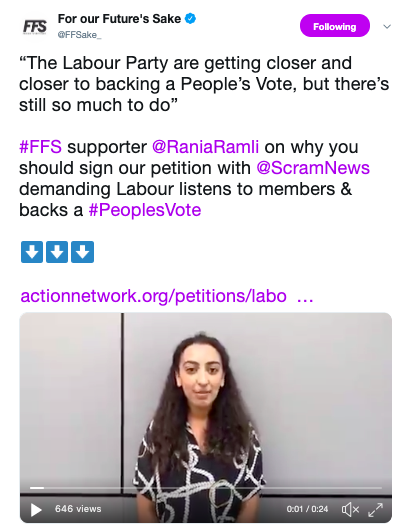 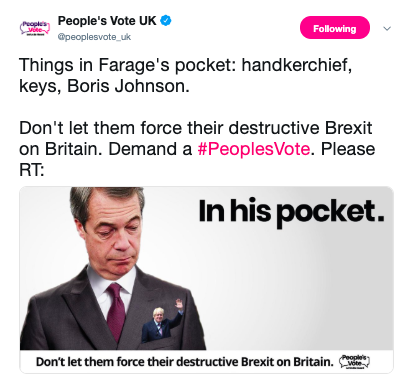 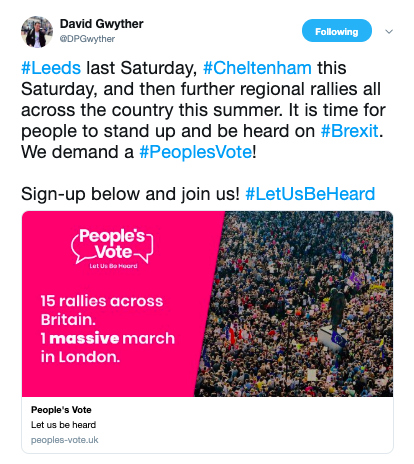 This weekend campaigners will be taking to the streets across the UK in places including St Ives, Swindon, Clevedon, Bradford, Thame, Islington and West London to talk to people in their local communities about the need for a People's Vote. Join them this weekend and to volunteer to support us through a packed summer of events, click here.

UK will ask for EU membership in 10 years (PoliticsHome)

How Johnson is plotting his path to Number 10 (HuffPost)

Guy Verhofstadt: Boris Johnson's talk of "global Britain" is about to look even more ridiculous (Guardian)