Young people living in the age of Brexit could have earned up to £72,000 less by 2050 under the kind of hard Brexit Theresa May is aiming for, according to a new report from Our Future Our Choice. That’s at least double the deposit on a first home.

The worst case scenario, where we crash out of the EU with no deal at all, will mean up to £108,000 in lost earnings by mid century.

The figures, calculated by Thomas Peto, an economist at Oxford University, are based on the Treasury’s own leaked projections of the damage Brexit will cause.

Of course young people, who have grown up with both a British and a European identity, stand to lose much more than just cold hard cash from Brexit. Other concerns in the report include:

Over 70% of young people voted to remain in the EU in 2016. Many more didn’t even have a vote in at the time, and recent polling suggests 84% would vote to stay in the EU. And yet they are the generation that will be hit hardest for longest by a botched Brexit. The future of the young is one of the most compelling cases for a People’s Vote on the Brexit deal.

YOUNG PEOPLE CAN’T AFFORD BREXIT. IF YOU BELIEVE THEY SHOULD BE GIVEN A CHOICE ON THEIR FUTURE, SIGN OFOC’S PETITION HERE.

“Since June 2016, there are nearly two million more young people eligible to vote. It is only right that they have a say in their nation’s future.”

Video of the day

WATCH: OFOC activists in Bristol campaigning as part of the week of action, getting people to write to their local MP calling for a People’s Vote. 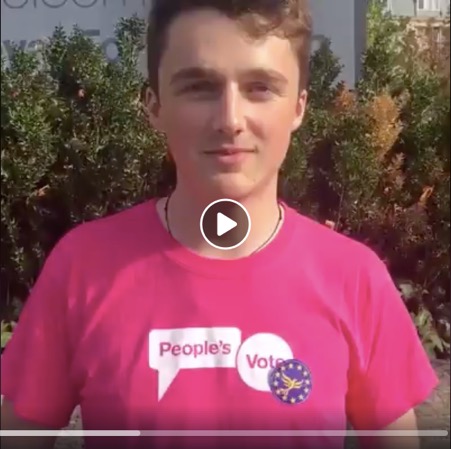 Blaming EU for no deal is Raab-ish

Dominic Raab is limbering up for the Brexit blame game. If we crash out in the chaos of no deal it will be because of the EU’s “deliberately intransigent” approach to talks, the Brexit secretary told MPs yesterday. It’s clear why Raab’s trying to shift the blame. He knows the truth is now that any deal will be a bad deal, and will look a million miles away from what anyone voted for. This means it is unlikely it will get through a gridlocked Parliament, which increases the likelihood of either a no deal exit or a People’s Vote.

The reality is dawning on Raab and others that the quick, easy and cost-free Brexit they promised voters in 2016 is simply undeliverable. That’s why we are hearing ever-more people - from the civil service to MPs to the EU - being blamed for the bad deal that is emerging. Prepare for more of this blame game on the weeks and months ahead.

Video of the day 2

WATCH: Patrick Kielty says Northern Ireland didn’t vote for Brexit or take back control of the border. They would much rather have peace. No one voted for a hard border, which is why we need a People’s Vote. Tell your MP how you feel HERE. 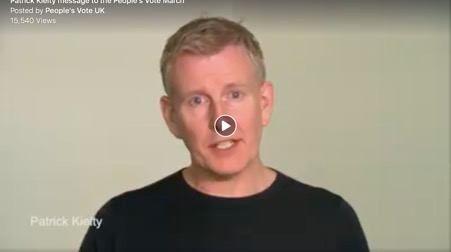 Top politicians from four parties - the Lib Dems, SNP, Plaid Cymru and Greens - told EU chief negotiator Michel Barnier to begin “serious contingency planning” for a vote on the Brexit deal, during a joint visit to Brussels yesterday. The group said the “current Brexit trajectory” being put forward by Theresa May has no majority in Parliament. They said there is “genuine cross-party consensus that our exit from the European Union must not be assumed”.

Seb Dance, MEP for London, called for a People’s Vote in the European Parliament, asking MEPs to consider giving the UK extra time to hold a vote, and received enthusiastic applause. He is also right that the Brexiteers aren't delivering on their promises. Speech HERE. 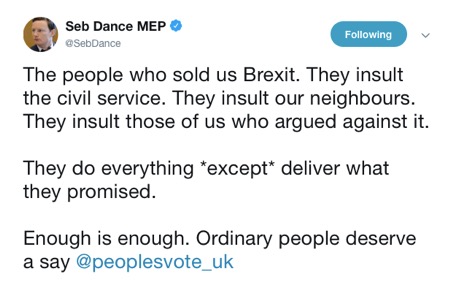 Whatever is in Monday’s Budget, the last before our scheduled departure from the EU, there will be no economic boost from Brexit and no Brexit dividend. Any uptick the government predicts from getting a deal with the EU will only be in comparison with the miserable growth and investment we’ve seen since the 2016 vote. It would be dwarfed by the rush of blood to the economy if there’s a People’s Vote and the public decides not to proceed with Brexit at all.

Lord Sugar: I could have swung EU referendum (BBC)

UK may not like Swiss advice on post-Brexit future (Politico)

Polly Toynbee: May’s great escape is as phoney as the loyalty of her Brexit-loving MPs