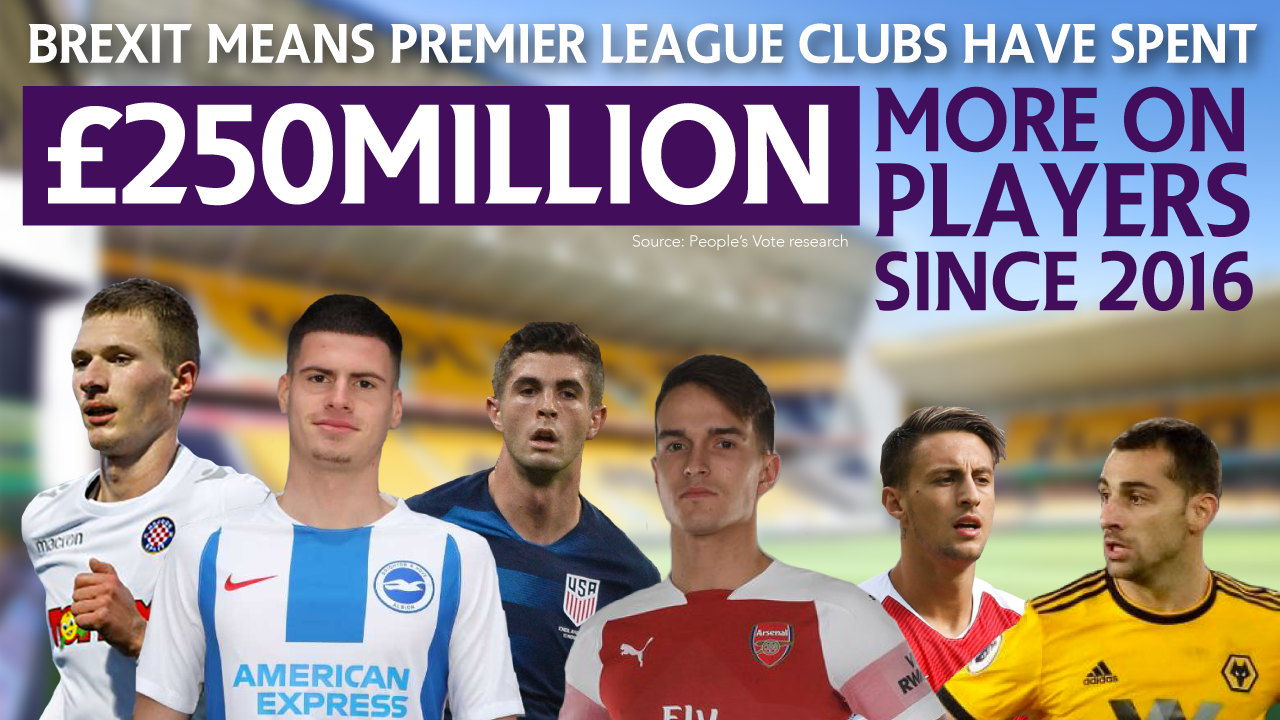 Football fans will end up footing the bill for a £20 million hike in club transfer fees in January caused by Brexit.

Premier League clubs paid a total of £95 million in transfer fees from European clubs during the January window, but the slump in the value of the pound against the Euro following the Brexit vote in 2016 means that the cost of signing players from Europe added almost £22 million to that bill.

The total cost of Brexit for Premier League clubs in the last four transfer windows combined is now nearly £250 million - more than the market values of more than half the teams in the league.

The worst hit club was Chelsea, whose £56 million transfer fee for Christian Pulisic would only have cost the club £43 million if the exchange rate had stayed as it was before the Brexit referendum. Similarly, Wolverhampton Wanderers paid more than £4 million more for £18 million signing Jonny Castro Otto than they would have had to fork out in 2016.

“Football is not just the national game: the success of the Premier League has been a world-wide sign of Britain’s cultural power and global reach and brings in millions in international television rights and tourism. Brexit threatens all of that and is already cutting deep into clubs’ ability to compete at the highest level.

“Nobody voted in 2016 to see English and Welsh football clubs decline in international stature or to turn their backs on the phenomenally positive influence that the Premier League has had over people’s perceptions of Britain as a dynamic and modern country.

“Instead of another round of fantasy Brexit or endless rows in a deadlocked Parliament, more and more football fans want to see the decision handed back to the public. A public vote is now the only way forward on Brexit and the only way left to protect the success of Premier League football as a global power.”

People’s Vote has compiled the signings made by Premier League Clubs from EU countries. We have then converted the transfer fee in euros into pounds sterling, once based on the exchange rate on the 31st of January 2019, and once for the 23rd of June 2016, just before the referendum result crashed the value of the pound.

NB: Cardiff City are not represented in figures for January 2019.